A little surprisingly, there aren't many full-hybrid small SUV crossovers on the market - just conventional models, mild hybrids and full-electric contenders. But Hyundai has noted the success that Toyota's C-HR has had in providing a full-hybrid option in this segment and in response, has used the engineering first seen in the Kia Niro to bring us this Kona Hybrid model.

The Kona small SUV, named after the island of Hawaii's Kona district, has proved to be one of Hyundai's strongest-selling models. It was first launched in 2017 with a range of petrol and diesel engines, then a full-electric battery-powered EV version joined the range in 2018. A year later, the CRDi diesel powerplants in the line-up were replaced by the far more eco-conscious variant we're going to look at here, the Kona Hybrid, a petrol/electric derivative using much of the engineering already seen in the company's frugally-focused IONIQ model. We ought to clarify the terminology here. 'Hybrid' is a word bandied about quite a bit these days, but very often at present, it designates 'mild hybrid' technology, the sort of thing you get in this class for instance in a Ford Puma, which sees a normal combustion engine only very marginally electrified by a tiny battery positioned under the rear seat. Full-Hybrid engines are very different and, unlike mild hybrids, can switch to full-electrification in city motoring. Toyota's C-HR and Kia's Niro are the only other brands currently offering such a thing in the small SUV segment.

The Kona Hybrid takes its drivetrain from the proven IONIQ Hybrid, using a Kappa 1.6 GDi Atkinson Cycle combustion engine working with a 1.56kWh battery and a 32kW motor to deliver a maximum hybrid system power of 141PS and 265Nm to the front wheels, via a 6 speed dual clutch transmission. That torque output isn't quite as much as was generated by the diesel version being replaced here, but it's not too far off. This model's little electric motor draws its energy from a lithium-ion polymer battery, but it's only 1.56kWh in size, so definitely not of the plug-in variety. As for performance, well 62mph from rest takes 11.6s en route to a 115mph maximum. This mildly electrified Kona model takes its more sophisticated multi-link rear suspension from the top variant in the petrol Kona range, the 1.6-litre 'Premium GT' derivative. And it can offer a towing capacity of up to 1300kg. On the move, you notice a somewhat rough, coarse note to the GDI petrol engine under harsh acceleration - it's one of Hyundai's older units. But lift off and refinement reigns supreme, perfectly complementing the light but accurate 'Motor Driven Power Steering' system that makes the car so easy to precisely place on the road, whether you're in town or threading your way at speed through corners on the open road. To improve traction and damping through those bends, there's also an 'Advanced Traction Cornering Control' package. Plus there's a 'Sport' mode to sharpen throttle response and give the steering a little more weight. 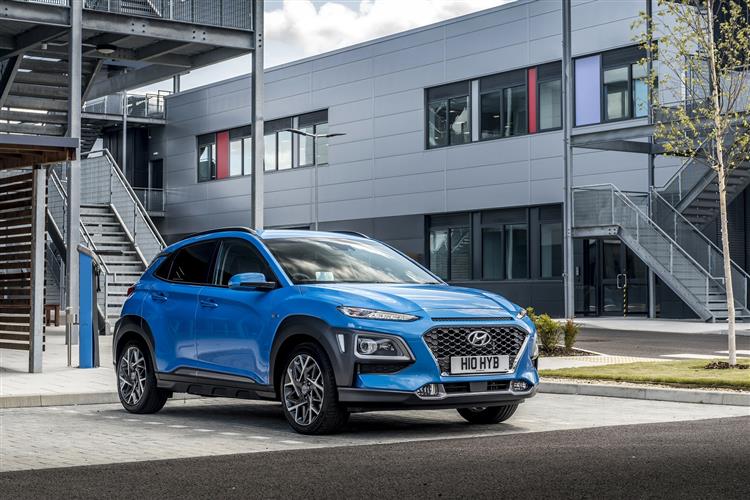