TOTTING UP (some text hidden)

The Volkswagen e-up! is an electric version of the up city car. Jonathan Crouch takes a look at the Wolfsburg brand's now-improved representative in this rapidly burgeoning sector.

The Volkswagen e-up! is an electric version of the popular up! city car with a now-longer range of around 159 miles. It remains a strong package, but there are still nagging doubts as to how it can justify itself on the balance sheet against a more prosaic petrol-powered up!

Shall we get the jokes about it being trialled first in Yorkshire out of the way good and early? Let's get to the facts here. Back in 2014, the e-up! was Volkswagen's first tow in the water when it came to electric cars. Back then, the battery range was rated at just 83 miles - and that was on the old, rather unrealistic NEDC cycle. Today's e-up! Can, in real terms, go almost twice as far, thanks to a larger lithium-ion battery pack and it's been much improved in terms of comfort and safety. As it needed to be to combat the new wave of small battery-powered models now hitting the market. Should this one be on your shopping list? Let's find out.

The Volkswagen up! actually makes a great basis for an electric vehicle. The powerplant sits low in the engine, a lithium ion battery pack now almost doubled in capacity, up from 18.7kWh to 32.3kWh. The fact that this battery weighs 230kg and is sited under the floor area has benefits and drawbacks. The plus side is that the centre of gravity is good and low, something you'll feel when tipping the up! into a corner. The downside is that whereas an entry-level petrol-powered up! weighs around 929kg, this electrically-powered version tips the scales at nearly 200kgs more. The sheer amount of torque available masks this fact quite well though, and the car steps off the line briskly, making 37mph from rest in around 5 seconds. Acceleration does tail off markedly above 45mph or so though, but given that this car's going to spend most of its time in urban areas, that's not really a pressing concern. As well as a standard driving mode, the e-up! has two economy profiles as standard: 'Eco' and 'Eco+'. 'Eco' cuts the vehicle's peak power to 50 kW, reduces the output of the air conditioning system and modifies the throttle response. 'Eco+' limits maximum power to 40 kW, further modifies the throttle response and disables the air conditioning. On top of these different operating modes, the range of the e-up! can be greatly influenced by regenerative braking. There are five modes available: D, D1, D2, D3 and B. In D, the vehicle coasts when the accelerator is lifted. In each of the next levels, lifting off the throttle pedal provides an increased level of regenerative braking. In D2, D3 and B, the brake lights are automatically activated when the driver's foot is lifted from the throttle pedal. If anything, the extra weight means that the e-up! rides better over typical city streets than its petrol counterpart. Refinement is very good, as you'd expect from a car with no internal combustion engine. There's just a background whine from the electric motor and some bump and thump from the suspension but otherwise it's extremely serene and takes the stress out of nose-to-tail queuing. 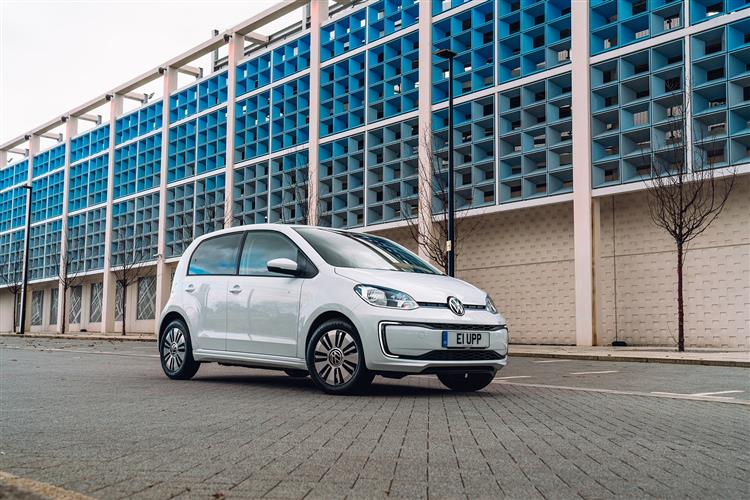