TAKING THE RAP (some text hidden)

There's never been a pick-up quite like the Ford Ranger Raptor. Jonathan Crouch drives it.

If you've ever daydreamed just how much of a hoot it would be to race along off road trails in the way that competition drivers do on the Paris-Dakar or Baja Rallies, then you're in good company: Ford thought it would be fun too and tasked its 'Performance' department with creating an ultimate Ranger derivative that could do just that - and here it is, the Ranger Raptor. There's nothing else quite like it.

If you know anything about American pick-up trucks, you'll know about the Ford Raptor, a huge US light truck based on the Blue Oval brand's enormous F150 model and powered by a wild engine from the Ford GT supercar. The company didn't think that vehicle would work over here, but they have built some of its technology into a more Euro-friendly Ford Performance pick-up model - and this is it, the Ranger Raptor. Don't expect extreme power here; the Ranger Raptor uses exactly the same 210PS 2.0-litre EcoBlue diesel engine you'll find in top versions of the standard model. But this vehicle isn't built for straight line tarmac speed. Instead, Ford has completely redesigned the suspension of this pick-up so that it can be driven at previously unheard-of speeds of rough terrain. And we're going to test it.

What matters here is not the powertrain (which is the same 213PS 2.0-litre EcoBlue diesel and 10-speed auto gearbox combination you'd find in an ordinary top-spec Ranger) but a bespoke chassis and suspension set-up that enables you to better use it at higher speeds over rough off road surfaces. The frame is heavily reinforced with high-strength steel. And completely re-engineered at the back to accommodate a unique rear suspension design that ditchers the regular leaf springs, replacing them with coil springs and a special Watts linkage to help locate the live rear axle and stop it swaying about. This package of uprated component parts is designed to withstand travelling cross-country or over desert tracks at speeds of up to 105mph. This is, in short, a rough road sportscar and it's as close to a Dakar rally racer as a production model is probably ever going to get. In keeping with that remit, this Raptor gets uprated springs all round, special FOX Motorsport dampers and bespoke 17-inch wheels shod with knobbly BF Goodrich KO2 tyres featuring specially-strengthened sidewalls. The result at speed off road is quite astonishing stability at speed over bumps and ridges. It really is fantastic fun providing you don't go too wild, especially if you select rally-orientated 'Baja' mode - one of six available through the Raptor's bespoke 'Terrain Management' system; the others are 'Normal' and 'Sport', plus three further settings for lower speed work - a 'Grass Gravel Snow' option, a 'Mud & Sand' option and, for inching along gullies, a dedicated 'Rock' mode. 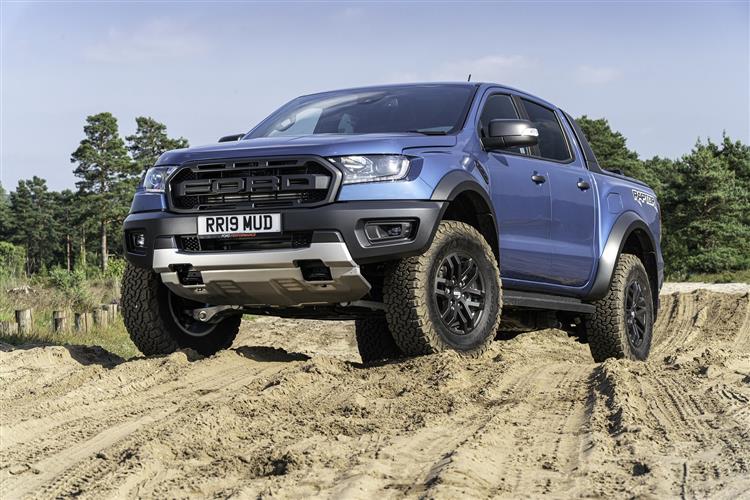