ONE TO WATCH? (some text hidden)

The third generation 1 Series is at its best in base three cylinder 118i petrol form, reckons Jonathan Crouch.

BMW is a company that always used to try and do things differently, a refreshing trait in a sea of automotive sameness. The Bavarian brand's reputation as the purveyor of 'The Ultimate Driving Machine' was once fundamentally built around rear wheel drive but this third generation 1 Series is defiantly front-driven. A package that's claimed to be optimum in the base petrol 118i guise we test here.

Why the change away from front wheel drive here? Well, lots of reasons really. BMW wanted more return for its investment in front-wheel drive architecture. And at the same time, the brand was uncomfortably aware of just how much the packaging limitations of rear wheel drive - cramped space for luggage and back seat passengers - were hobbling the 1 Series in comparison to its more conventional Audi A3 and Mercedes A-Class rivals. All of which seemed a bit pointless given BMW's own research showing 80% of 1 Series owners not knowing what end their cars were driven from - and not caring either. The deal was sealed when the Bavarian maker's engineers assured the board that new technology could allow for a switch to front-wheel drive for this car without any real dilution in driving pleasure; we'll see. What's certainly true is that the change in drivetrain format has, as intended, freed up significantly more interior space than the previous 'F20' version of this car could offer, despite the fact that this 'F40'-series design's roadway footprint is much the same. Sounds promising. Time to put this car to the test in volume 118i form.

The switch from rear-driven to a front-driven powertrain might be the headline story here but there's plenty else that's new with the engineering of this third generation 1 series design. The Bavarian maker's aim was to repackage this model to a more conventional formula but deliver that in a very BMW kind of way - and that's essentially how this car has turned out. On the move, you get a grippy, confident sense of purpose that rivals can't quite match, with precise, accurate steering and an agile willingness to change direction. All of it aided by near-perfect weight distribution, a clever new 'ARB' traction control system that more precisely meters out torque and a new 'FAAR' chassis that saves around 25kgs of weight. The ride is somewhat firm, but BMW fans won't mind that, particularly as there's now the option of adaptive suspension on top-spec models. It's quite likely that you'll opt for the base 1.5-litre petrol model we tried, the 140hp 118i variant we're trying here - not least because there aren't any other options if you want a reasonably affordable version of this car that fuels from the green pump. Just as well then, that it's a decent all-round package which offers as much performance as most buyers will probably need, the 62mph sprint occupying 8.5s en route to 132mph. To be frank, we've heard more charismatic three cylinder units, but at least this one's decently refined, bettering a comparable Mercedes A-Class in this regard at highway speeds. 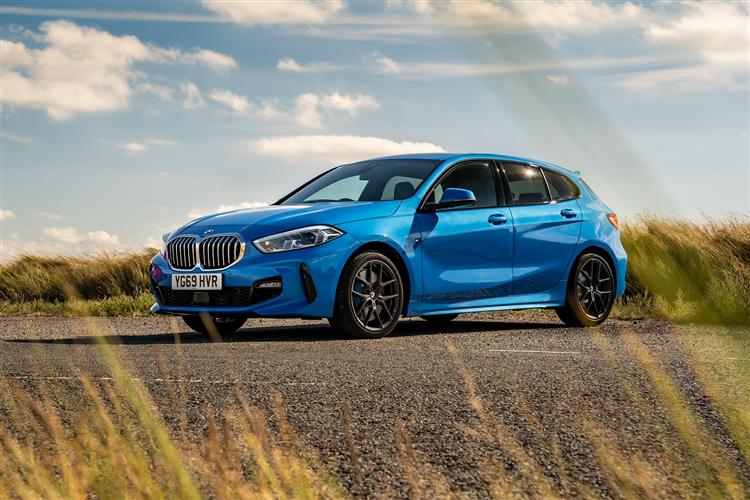