The GLC brings a bit of Mercedes polish to the premium part of the mid-sized SUV segment. Jonathan Crouch drives the 220d version.

In an era where one in every three Mercedes models sold is an SUV, this GLC is a crucial model for the brand. In mid-2019, four years into its production run, this mid-sized premium model was usefully updated to create the car we're going to look at here. Here's the GLC 220d diesel version that most customers buy, complete with the new-era 2.0-litre diesel engine that's done so much to improve this car.

The GLC shares plenty with the C-Class models that roll down the same German production line in Bremen. Which is why this SUV benefits from much the same kind of update package that was visited upon the fourth generation version of that car in 2018. So there's a smarter LED headlamp and grille combo and inside, infotainment updated with the latest MBUX media system. Semi-autonomous driving tech makes an appearance, there's now the option of a fully-digitalised instrument cluster and, as before, buyers get the chance to add sophisticated air suspension. More important than all of that though, is that the volume 220d diesel variant that almost all GLC buyers choose gets a completely fresh 2.0-litre OM654-series engine that offers vast improvements in refinement, efficiency and technology. In short, the GLC is now much better equipped to take on key direct rivals launched since this design's original introduction, cars like the third generation BMW X3, the second generation Volvo XC60 and Alfa Romeo's Stelvio, as well as improved versions of established rivals like the Audi Q5 and the Jaguar F-PACE. Sounds promising. Time to check this Mercedes out.

The GLC has been rejuvenated beneath the bonnet, the key update being the introduction of the 2.0-litre 'OM654'-series diesel unit we're trying here in the GLC 220d variant that most buyers of this car in our market choose. This engine is far more refined than the rumbly 2.1-unit it replaces - and is mated to a package that as in all GLCs, includes 4MATIC on-demand 4WD and a 9G-TRONIC PLUS 9-speed auto gearbox, which works with the usual 'DYNAMIC SELECT' driving modes that alter drive response, steering feel and ESP settings. This four cylinder diesel powerplant is probably the most refined unit of its kind that we've come across and always feels impressively smooth and free from vibration, a vital consideration when you're looking for a car that will ease you along with the minimum of fuss. Even under firm acceleration, this engine remains calm, unruffled - and reasonably rapid too. There's a lusty 400Nm of torque, which helps propel the car to 62mph in 7.9 seconds on the way to a top speed that's rated at 134mph. Buyers won't care much about off road prowess, though it's worth pointing out that unlike some class rivals, the GLC actually has some. The 4MATIC 4WD system the car uses is like virtually all AWD systems in this segment in that it only engages the rear wheels when a lack of traction calls for it. 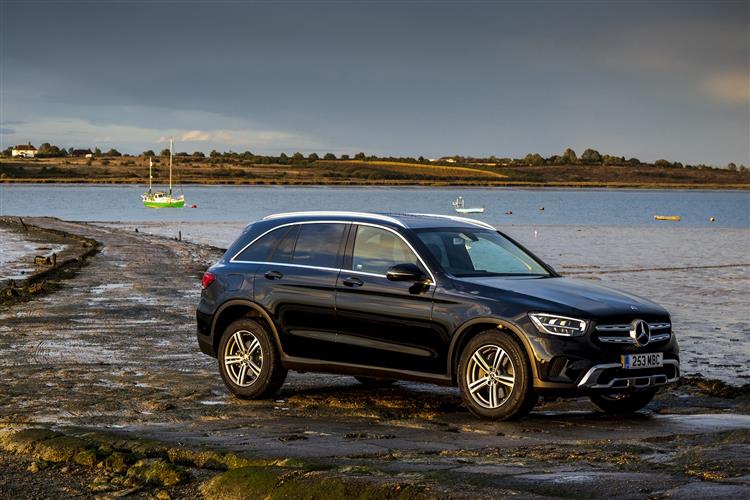