If you want a fashionable small SUV that's good on the mud, there's nothing quite like a Range Rover Evoque. Jonathan Crouch tries the D200 version.

In recent times, the picture's not looked too rosy for Land Rover. The company's been wrong-footed in the dash away from diesel and now faces increasing SUV competition from every part of the industry. Hence the need for this rejuvenated second generation version of its Evoque premium compact-to-mid-sized SUV model. The visual continuity with its predecessor is intentional, disguising the fact that almost everything's changed here. Starting with a new 'Premium Transverse Architecture' platform that makes possible a whole new range of mild hybrid engines, including the D200 diesel version on test here.

Thanks to a longer wheelbase, this MK2 model Evoque's more sophisticated 'PTA' chassis has a better shot at a brief its predecessor really struggled with; namely, straddling both the compact and mid-sized premium SUV sectors. It's still no bigger than a Focus outside, but there's now enough room inside for you to feel better about paying BMW X3 or Audi Q5 money for one. Which of course is as vital for Land Rover as the installation of the kind of more premium cabin you'd find in SUVs of that sort. That's now delivered by the single 5-Door body style now on offer, as well as a range of really clever design innovations, including a 'Clear Sight' virtual rear view mirror and a self-learning 'Smart Settings' system that adjusts the car to your preferences as you approach it. Some things haven't changed though: the Evoque is still easily the most capable car in its segment off the beaten track. In short, it's still a proper Range Rover. It's just that now, it feels a lot more like one. Let's put this car to the test in D200 diesel MHEV form.

Don't be misled by the lightly evolved looks; an awful lot of work's gone in to evolve this second generation 'L551'-series Evoque model, especially under the skin. As soon as you set off in it, there's a heftier, more solid feel than the previous car provided, complemented by an altogether more absorbent quality of ride from a redesigned suspension set-up, with mechanicals derived from larger Range Rovers. The much stiffer 'Premium Transverse Architecture' chassis helps here, a platform which also makes possible the fitment of a fresh range of 2.0-litre petrol and diesel engines. We tried the diesel unit in its D200 state of tune, which really would make a good tow car, with 430Nm of grunt; the performance stats are 7.9s (0-60mph) and 120mph (max). In truth, this top diesel unit doesn't feel anything like that fast, the vehicle's rather heavy weight exacerbated by the gearbox's reluctance to shift down as quickly as you might want when a rapid burst of speed is called for. All is forgiven when you venture off the beaten track though. No competitor can hold a candle to the Evoque's prowess on the rough stuff. You'll damage any rival if you attempt to get it anywhere near what this little Range Rover can do 'off piste'. That's thanks to 212mm of ground clearance, 600mm of wading depth capability and an evolved 'Terrain Response 2' driving mode system which sets the car up perfectly for the type of ground you're travelling over. 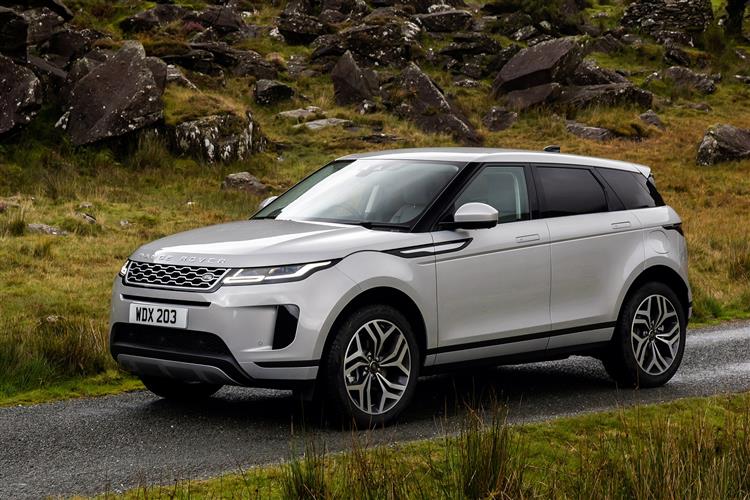