Today, you simply wouldn't design a high performance model of any kind like the Porsche 911, engine pitched right back, hung over the rear wheels. Which is exactly why, since it first appeared in 1963, there really has been nothing quite like this car. And probably never will be. Here's the 8th generation '992'-series version. We're going to test it here in 450PS Carrera 4S Coupe form.

Despite what the exterior looks might suggest, this is a lot more than simply an evolved '991'-series car. The subtle exterior re-design clothes a body that's lighter and stiffer thanks to a doubling of its aluminium content. Plus there's a new 8-speed PDK auto gearbox, a higher-class cabin, re-designed suspension, even better brakes and (for the first time) different-sized wheels front-to-rear on mainstream models. Plus you get a lot more technology, including a clever new 'Wet Mode' which adapts the drive dynamics to suit slippery conditions. Will it all be enough to allow this car to re-claim an undisputed position as the sharpest driving tool in Porsche's line-up? And will people who've waited all their lives to own one of these, feel that they've missed the chance to have a real one? A tough brief for the most ambitious 911 Stuttgart has ever made. Let's put this Carrera 4S version to the test.

The engine has always dominated the 911 driving experience and that's just as true with this '992'-series 'Carrera'-series model. The twin turbo 3.0-litre flat six may have a very different sound and feel to the bigger-capacity units served up by rivals, but you still get a delightful howl from the 'boxer' motor - and this time round, significantly more power too to compensate for a 55kg increase in weight. There's 385PS in the base Carrera and 450PS in the Carrera S, with rear wheel drive or 4WD options in each case. With so much low and mid-rev torque from this powerplant, you can drive it as lazily as you like. Press harder though, and this Porsche's brilliant handling is matched by almost staggering speed. Pick the right combination of engine, gearbox and options - this Carrera 4S Coupe for instance - and the car will rocket past 62mph from a standstill in just 3.4s. As before, there's a manual gearbox available, but most buyers will want the PDK paddleshift auto, which now offers eight speeds. The optional 'Sport Chrono' pack gives you Launch Control and a 'Sport Response Button' that preconditions the drivetrain for maximum acceleration over 20 seconds for swift overtaking. Dynamic changes to this '992'-series car include sharper steering, a wider front track width and wheels (now unequally-sized - bigger at the back) which are a size larger than before, with a mix of 20 and 21-inch rims on this 'S'-series version. 'PASM' adaptive damping is standard, as are Dynamic engine mounts and 'PTV' torque vectoring. Plus the usual selection of drive modes has been added to with a 'Wet mode' that senses excess road surface spray and can adapt the handling for slippery conditions. For extra cornering stability on Carrera S models, you can add in the 'Porsche Dynamic Chassis Control' active roll compensation system and 'Active Rear-Axle Steering'. Even in standard form though, a 911 Carrera delivers a more driver-centric feel than its competitors. Right at the edge of adhesion, you feel a greater sense of confidence and control as part of an experience that's even more complete and satisfying this time round. 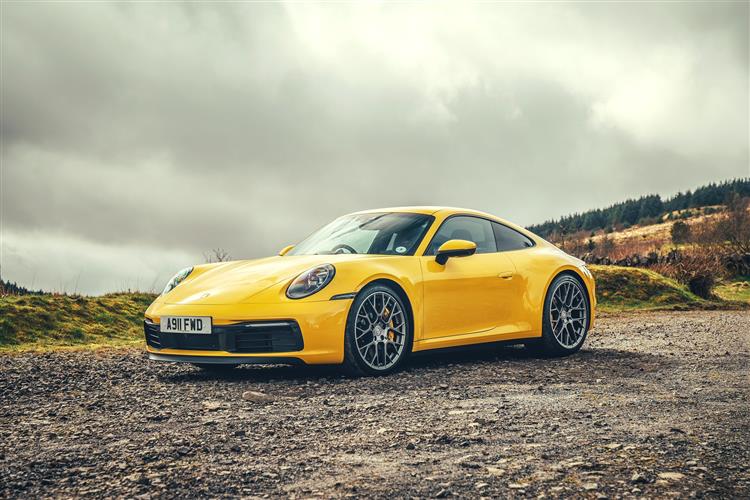