The BMW 3 Series is at its most competitive in 320d guise. Jonathan Crouch takes a drive.

The BMW 3 Series is still the definitive mid-sized sports saloon and it sells most strongly in this 320d four cylinder diesel form. The powerplant on offer here now gets sequential twin turbocharging, plus the suspension has been much improved with the addition of clever 'lift-related' dampers. In short, this car's taken a useful step forward.

Think of a really sharp handling relatively compact sports saloon and it's probable that you're thinking of this car, BMW's 3 Series. Over more than four decades, it's dominated the segment it first invented and upwards of 15 million of them have been sold. So of course the company's hopes are high for this seventh generation version. The Munich maker certainly needs this contender to be good. The Bavarian marque used to advertise every car it made as being 'the ultimate driving machine', but that hasn't been a slogan appropriate to many of the SUV-inspired or electrified models the company's brought us in more recent times. And it's also been a difficult mantra to meet as the 3 Series has become larger and heavier over the last few years. It was time for a re-set. The question is whether this 'G20'-series design is good enough to provide it. I tried a 320d variant to find out.

Much is familiar here; a front engine, rear wheel drive formula with near perfect 50:50 weight distribution has defined the 3 Series to date and this seventh generation model doesn't deviate too far from that script, But also much is different. The company's xDrive 4WD system is more widely available across the line-up including on the 190hp 320d variant we're trying here. And BMW's engineers were given permission to add more of a sporting edge to this 'G20' design, being aided in that quest by this MK7 model line's adoption of the aluminium-rich 'cluster architecture' platform these days used by the brand's larger models. This has provided a platform that's 25% stiffer and it's been a major contributor to weight savings over the previous 'F30'-series model of up to 55kgs. From this optimum starting point, the development team then added in a whole range of handling updates, with the most significant addition being the special so-called 'lift-related' dampers. These clever shock absorbers incorporate structures that provide extra damping at the extremes of wheel travel and are standard on all models, allowing quite a firm sporting set-up to be adopted, but also one able to deliver a fluent ride over tarmac imperfections. Thanks to that, this car's able to combine a set-up for Silverstone with something that works equally well on the North Circular. Upgraded four-cylinder 2.0-litre engines from BMW's Efficient Dynamics family are used across the powerplant range. The diesel line-up kicks off with the 150hp 318d, but most buyers prefer the 190hp 320d derivative I sampled, which slots into the range just below the 265hp six cylinder 330d. A new generation six-speed manual gearbox is available - though only on the 318d and 320d diesel variants. Most buyers of these models though will want to pay extra for the 8-speed auto gearbox that's mandatory with all the other engines. 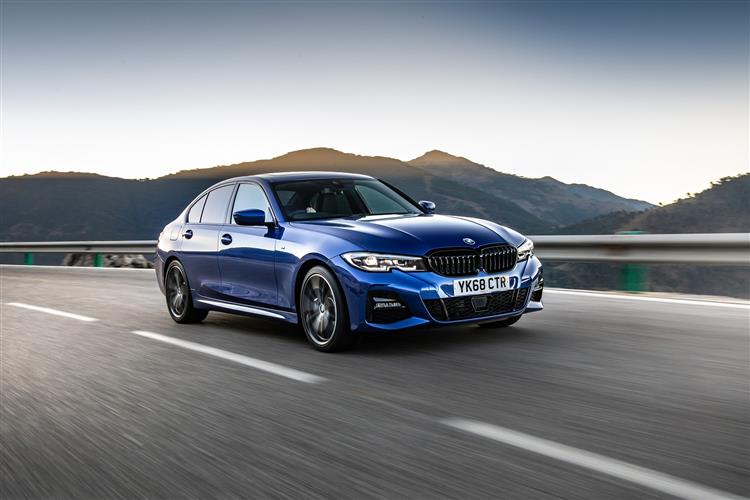