Mazda has always been a bit unconventional in its approach to automotive design. Except, historically at least, when it's come to arguably its most conventional model, the Mazda3 family hatchback. But all that changes right here, right now with this fourth generation version. You can see at a glance that the styling's different from the norm and, as we discovered at the wheel of a Skyactiv-G petrol version, much else is too.

Think of a car of this type as good to drive as a Ford Focus, as good inside as a Volkswagen Golf and as good to look at as an Alfa Romeo Giulietta. That's what Mazda was aiming at. As for what we've got, well there's quite a lot. The fact that the new 2.0-litre 'Skyactive-G' petrol engine we're going to try here ignores turbocharging is another break with current convention, though Mazda has followed the current trend towards part-electrified mild hybrid technology for it. All of this engineering's bolted to a brand new much stiffer platform. And, the trend with previous Mazdas for slinky styling to clothe rather dull cabin design has been broken here with what might just be the nicest interior in the segment. Add in standard equipment features you'd have to pay extra for on rivals and plenty of camera-driven safety kit and you've a promising-sounding package offered either in this hatch form or as a smartly styled saloon. Time to put it to the test.

Keen drivers will know what we're talking about when we say that some family hatchbacks seem to want to fight your inputs and are a bit of a battle to drive, whereas others just work in harmony with you. This Mazda3 is one of the latter. In a manual version like the one we tried, you'll notice the lovely 'wrist-flick' feel of the stick shift change, which is complemented by feelsome steering, positive brakes - and decent ride quality too, despite this fourth generation model's shift away from independent rear suspension to a theoretically cruder torsion beam arrangement. The stiffer body also helps (contributing to exceptional cruising refinement). And in addition, there's also 'G-Vectoring Control Plus', a standard torque vectoring system that also takes steering inputs into account as it transfers traction to the wheels that can best use it at speed through the bends. You'll want to know about engines. If you select the one we tried, the base Skyactiv-G petrol unit with light M Hybrid assistance that most Mazda3 buyers are expected to choose, the performance feels extremely modest. Which is surprising when you consider that it's 2.0-litres in size. This isn't really down to the 122PS output - that's about par for the course with a base petrol powerplant in a car of this kind. It's more about the fact that Mazda refuses to fit turbochargers to its petrol engines, so rather counter-intuitively you get less mid-range pulling power than a Ford or Volkswagen engine of half the capacity. 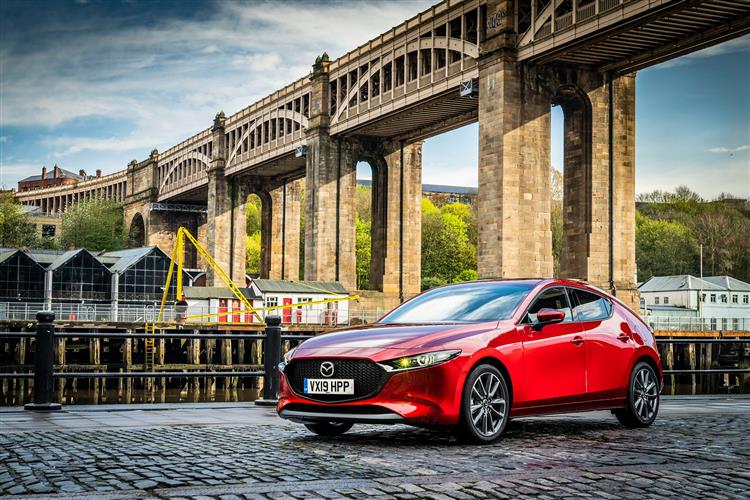