The Toyota Camry shares much of its engineering with its Lexus ES cousin but, as Jonathan Crouch discovers, this spacious medium-sized saloon is also very much its own car.

Toyota's making a habit of re-introducing its best-selling nameplates into our market. First, there was the return of the Corolla and now the Camry name is back too. As before, it sits on the boot lid of a Mondeo-sized saloon but this time, there's hybrid power beneath the bonnet - and that will be this Toyota's biggest selling point.

You might never have heard of the Toyota Camry. It hasn't been sold here since 2004 after all and we've missed a couple of model generations in the intervening two decades. In the US though - and in many other international markets - the Camry is big news for the Japanese brand: in America alone, over 400,000 Camrys are sold each year. It was canned in the UK just after the turn of the century because of Toyota's inability at that time to offer a diesel option. So it's a touch ironic that the demise of diesel has led to its return now as a 'self charging' petrol/electric hybrid that shares most of its engineering with the more image-conscious Lexus ES.

Under the bonnet sits a 2.5-litre four cylinder petrol engine aided by an electric motor powered by a battery of the 'self-charging' (ie non-Plug-in) variety. Total output is 218hp. In other words, in class terms it's just like a Ford Mondeo Hybrid. But unlike a plug-in Volkswagen Passat GTE or Kia Optima PHEV. As with those cars, you'll miss the in-gear flexibility that a diesel would give you. But that's the trade-off for saving the planet. The engine and/or the electric motor drive the front wheels via a sequential Shiftmatic auto gearbox. And of course the suspension is set up for comfort rather than for any kind of dynamic drive, though the stiffer platform of the car's GA-K chassis means it shouldn't be embarrassed if there's a need to push on round the bends. So what's the Camry experience like? Very quiet, is the answer. There's silence when first you begin and push the starter button. Silence when you ease through slow-moving rush hour traffic, the engine cutting in only above 25mph, unless you've a particularly heavy right foot. Like most hybrids, the car can trickle along powered by the battery pack only (as it is from start-off) or more usually, with a combination of both battery and engine, something you can monitor via a graphic display in the centre of the dash. 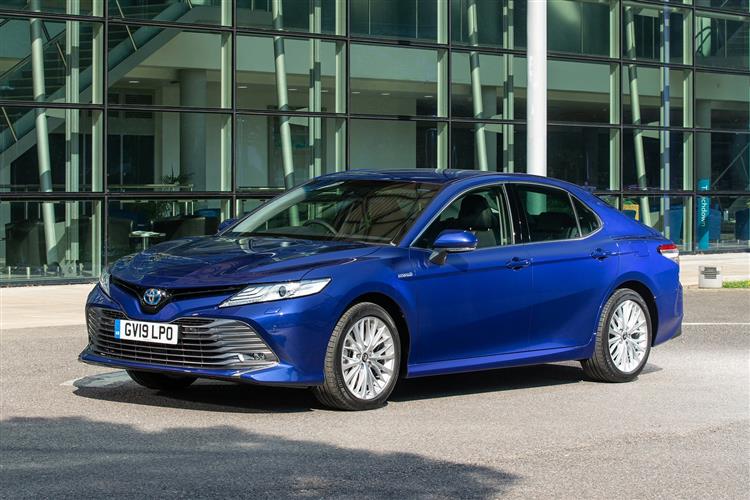