A CAB WORTH HAILING (some text hidden)

The Porsche 911 Cabriolet has improved in huge measures with this latest '992'-generation model. The hood is a brilliantly-engineered piece of kit and the chassis dynamics are better than ever. It's getting pricey though.

The Porsche 911 is more than just a car. It's a legend. As such, it carries a huge weight of provenance. Obscure design cues speak volubly. Individual colours have historical resonance. It's something to obsess over. Thing is, for some people it is just a car. A pretty and fast car, but just a car nevertheless. While most 911 purists would never choose an open-topped version, there's a healthy proportion of 911 customers who like the idea of limitless headroom. 'Real' 911 buyers sniff at these cars, denigrating these drivers as not getting the whole 911 'thing', but so good is the latest '992'-generation car that perhaps the purists are painting themselves into a corner. If owner experience and enjoyment are key to owning a sports car, who's to deny that 911 Cabriolet customers aren't one step ahead of the obsessives?

There's a weight penalty (70kgs) for choosing the Cabriolet body shape rather than the Coupe but that's well compensated for by the extra power on offer with this '992'-series model. In Carrera S form, it's now got 30PS more than it had before, putting out 450PS, which is enough in a 2WD model (if you've got the 'Sport Chrono Pack' fitted) to get you to 62mph in just 3.7s on the way to 190mph. So yes, it's as fast as you'd want. As usual, there's a Carrera 4S all-wheel drive variant, that version's figures being 3.6s and 188mph. Crucially, peak pulling power is developed low in the rev range from just 1,700rpm, which should make it easy to tap into performance which is accessed via PDK paddleshift auto gearbox now boasting 8 speeds. When it comes to refinement and insulation, there's not much difference to the experience you'd get with the coupe's metal roof, so the compromises you've to accept when choosing the Cabriolet body style are slimmer than they've ever been. Handling is typically immersive and adaptive damping (or 'Porsche Active Suspension Management') is standard, as part of a suspension set-up that remains unchanged. There's plenty that's new though. The steering rack has a faster ratio. And there's a new 'Wet mode' driving setting that senses the splatter or rain water in the wheel arches and then dials in appropriate settings for the engine, gearbox and safety systems at the same time as alerting you. 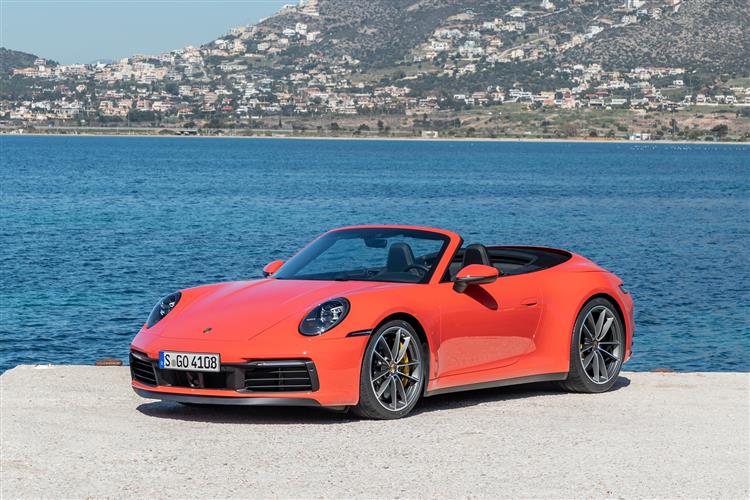