Porsche's eighth generation 911 is now smarter, cleverer and as intoxicating as ever. Jonathan Crouch takes a look.

Porsche's 911 reaches its eighth generation and in '992'-series form is bigger, faster, more luxurious and a tad more efficient. Just as you'd want. With coupe and cabriolet versions of this Carrera S, the 3.0-litre flat six gets more power and the PDK auto gets an extra ratio. But most importantly, it's still the most usable super sports car of its kind. Yet somehow also still the most exciting. Only Porsche knows how.

The Porsche 911 may have been around since 1963 but the pace of evolution in this model range has been so slow, even Darwin would struggle to notice it at times. The very first platform used in this car lasted all the way up to 1997, a millennia in automotive terms. Platform two that underpinned the '996' and '997' series models (to use Porsche's own internal chassis codes) lasted a further fifteen years before it was replaced in 2012 by the '991' model, which was then succeeded by this current '992'-series version in late-2018. Porsche knows that while people still love the 911's combination of pace, handling and genuine everyday usability, competition is tougher than ever. With tightening emissions regulations and rivals like the Mercedes-AMG GT boasting more power, continual changes have been needed in recent times, hence the introduction of the turbocharged 3.0-litre flat six in 2012 that's been given a shot more boost this time round. Add the latest tech too and Porsche hope to be back at the top of the class.

There's a 3.0-litre flat six plumbed-in out back - of course there is: this is a 911 after all. But in the Carrera S, it's now got 30PS more than it had before, putting out 450PS, which is enough in a 2WD model (if you've got the 'Sport Chrono Pack' fitted) to get you to 62mph in just 3.5s on the way to 191mph. So yes, it's as fast as you'd want. As usual, there's a Carrera 4S all-wheel drive variant, that version's figures being 3.4s and 190mph. Crucially, peak pulling power is developed low in the rev range from just 1,700rpm, which should make it easy to tap into performance which is accessed via PDK paddleshift auto gearbox now boasting 8 speeds. Those worried about losing the 911's distinctive noise at high revs are promised a lofty (for a turbo motor) 7,500rpm redline and the 'typical sonorous Porsche flat-six engine sound'. Handling is typically immersive and adaptive damping (or 'Porsche Active Suspension Management') is standard, as part of a suspension set-up that remains unchanged. There's plenty that's new though. The steering rack has a faster ratio. And there's a new 'Wet mode' driving setting that senses the splatter or rain water in the wheel arches and then dials in appropriate settings for the engine, gearbox and safety systems at the same time as alerting you. 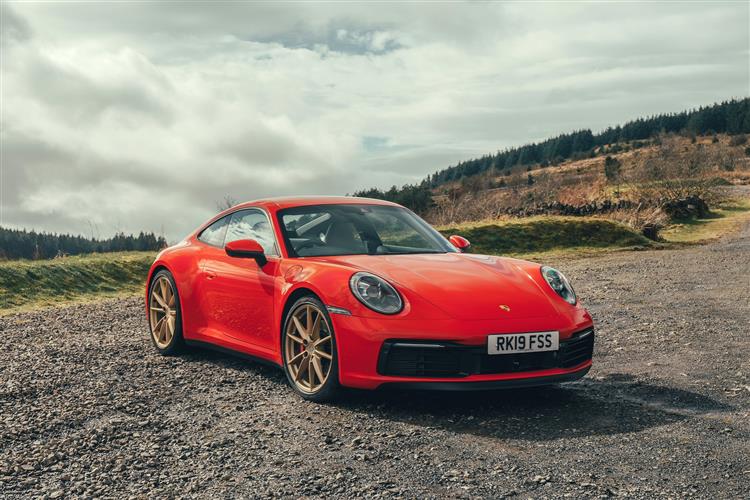