Porsche's improved Macan S continues to set the ultimate benchmark for just how dynamic the handling of an SUV can be. Jonathan Crouch reports.

The Macan is the Peoples' Porsche. The model to convert the SUV cynics. And an SUV with the soul - and the engineering - or a sports car. You might expect it to be fast and family-friendly. More of a surprise is that it's rewarding and, with the right spec, very nearly race-ready in its responses. Yet it'll comfortably take you off road, deal with the school run and cruise down to Chamonix. And it's very special indeed in V6-engined Macan S guise. Here's the revised version.

Lots of unlikely models have been described as 'sports cars' over the years. It's always been hard though, to imagine an SUV in that way. Or at least it was until the launch of this model, the Porsche Macan, in 2014. This car re-defined the way an SUV could drive and four years into its production cycle, the Zuffenhausen maker substantially upgraded it to create a contender then further improved in mid-2021; that's the version we look at here - in V6 Macan S form. A key change with this facelifted model has been an increase in power for the 3.0 V6 petrol engine borrowed from the larger Cayenne - this unit now puts out 380PS. Otherwise here, the updates are subtle - minor styling changes, upgraded cabin design, a range of fresh options and a series of dynamic tweaks aimed at further underlining this contender's claim to be 'the sports car of the SUV segment'. Of all brands, Porsche should know just what a claim that is to make about a model that weighs nearly two tonnes, is over 1.6m in height and must be engineered to tackle the Rubicon Trail as well as the racetrack.

The entry point for Macan ownership is with the standard 2.0-litre model, but that car only has a 265PS four cylinder engine. Ideally, you'd want the throatier note of a V6, in which case your starting point in the range will be the Macan S variant we're looking at here, which now puts out 380PS. And that's not all that's changed. Porsche says that the chassis has been further optimised for this updated model, so that the car should respond more directly and with greater sensitivity. It was already a handling leader in its class. As before, four-wheel drive is standard on all variants, although in normal road conditions, 100% of torque is directed to the rear axle. Should momentary slip be detected, a clutch pack locks, which can then send up to 100 per cent of torque to the front axle. There's also a torque vectoring system, while a torque vectoring rear differential is an option. There is a dedicated off-road mode, which optimises the torque split and gearbox shift points to better optimise grip and torque when it gets really slippery. Standard steel springs with passive dampers are standard on the S models, with adaptive dampers an option. In all its forms, the Macan still redefines the SUV segment standard when it comes to the way a car of this kind can corner at speed. The Macan S now makes 62mph from rest in just 4.8s en route to 161mph, half a second and 4mph quicker than before. Through the turns, the fizzing feedback you get through the 911-style steering wheel and the remarkable lack of lean through each bend together give you such confidence that you can attack each corner almost as hard as you want. The now-standard 'Porsche Torque Vectoring plus' system keeps the car planted through the tightest turn, firing you on from bend to bend. Most buyers upgrade to either PASM adaptive damping or full-air suspension, the latter set-up able to better facilitate the off road journeys that the majority of buyers will like the thought of but never take. 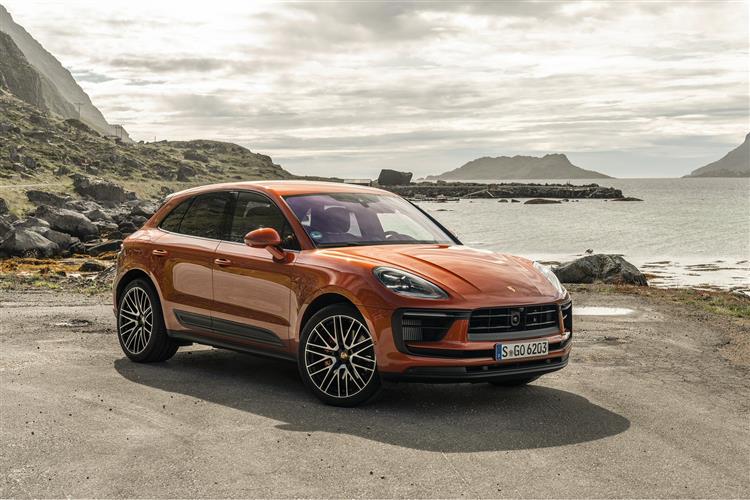