With this i30 Fastback N, Hyundai has broadened the reach of its 'N' performance sub-brand. It's the kind of car you might not expect from this Korean maker, with a 275PS power output intended to provide performance to embarrass German rivals.

Hyundai continues to be serious about performance. Hence the decision to add this stylish Fastback body style to the i30 N range of high performance models. As with the hatch version, it was developed by a team led by former BMW M Power boss Albert Biermann. And it's undergone a lengthy testing period at the legendary Nurburgring Nordschleife racetrack. Also like the hatch, it aims to slot right in amongst the established players in the volume part of the family hatch-sized GTI segment. The 'N' in the model name stands not only for 'Nurburgring' but also for 'Namyang', Hyundai's vast research and development centre back in South Korea.

So, what's it like beneath the bonnet? Well forget everything you know about Hyundai because none of that's relevant here: this hot hatch has been developed by people who seriously love their cars. What's different here over an ordinary i30 fastback? Well, the brakes are beefier, camber stiffness is up and the Pirelli P Zero tyres are of a unique compound. Yes, the 275PS 2.0-litre GDI engine is derived from a unit that Hyundai's had on its books for some time, but it's been embellished with a new turbo and a new intake manifold. Getting the idea? No expense has been spared here as part of a development regime on a different level to that of most like-minded rivals. 62mph from rest occupies just 6.1s and the car is equipped with an 'N Grin Control' system which allows drivers to choose from five different drive modes. The settings can be selected via dedicated buttons on the steering wheel: Eco, Normal, Sport, N and N Custom. Depending on the driver's mood, the different modes change the vehicle's character. 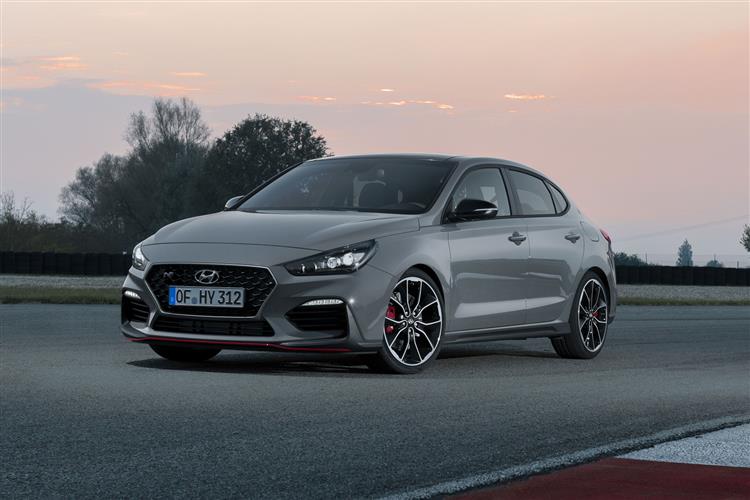