With this generation Mercedes E-Class Cabriolet, petrol power firmly takes centre stage for top models. One of the most desirable variants is the one we're going to try here, the 333bhp 3.0-litre V6 E400 4MATIC model. It's a consummate all-rounder.

Other German premium brands offer you one option if you're in the fortunate position of being able to decide upon a prestigiously badged premium executive class cabriolet. Mercedes though, offers two, the C-Class Cabriolet and the E-Class Cabriolet. The latter design is our focus here, in its top mainstream E400 4MATIC petrol form. Once, an E-Class Cabriolet buyer looking for the most desirable mainstream engine in the line-up would probably have signed up for the E350d V6 diesel variant, but with the recent backlash against black pump-fuelled motoring, variants like this E400 are gaining in popularity again. Let's put it to the test.

Mercedes had already established the market demand for 4WD models of this kind with the previous generation E-Class Cabriolet. This time round there are also E220d and E350d diesel models equipped with the brand's on-demand '4MATIC' system - plus there's the top petrol version we elected to drive, the 333bhp 3.0-litre twin turbocharged V6 E400 petrol model. This makes 62mph from rest in just 5.3s and has to be artificially restrained at 155mph. It's certainly a very refined thing, especially when you're cruising along at highway speeds, roof-down with the 'AIR CAP' device activated on the top of the windscreen to reduce buffeting. At motorway speeds, most convertibles are usually quite unpleasant with the roof down, but this E400 is quiet, easily allowing you to conduct a conversation with your passengers without raising your voice. What this car isn't is any kind of real sportscar - but then if you wanted one of those with a Mercedes badge, you'd probably have bought the brand's SLC model. Still, bodyroll is well controlled and there's no undue twist and flex from the chassis, even over quite pronounced bumps. As with all E-Class Cabriolet models, you get 9G-TRONIC nine-speed automatic transmission and the DYNAMIC SELECT system that allows you to tweak steering feel, throttle response, gearshift timings and stability control thresholds to suit the way you want to drive. Plus there's now the option of super-smooth air suspension if you want it too. 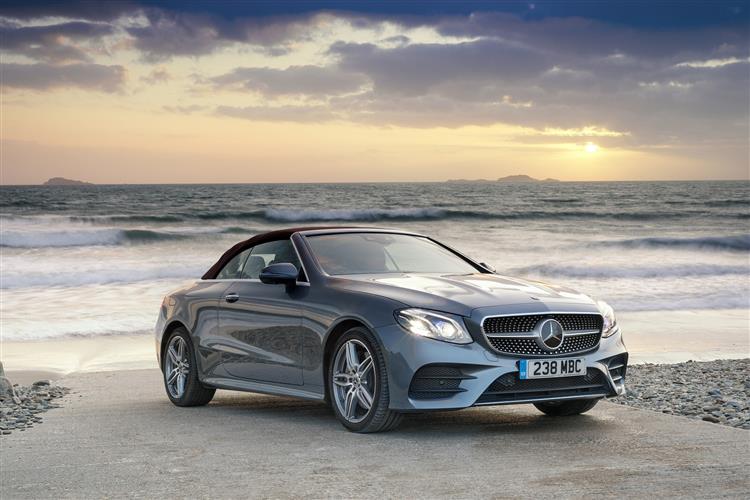