Vauxhall's family SUV, the Grandland X, will be most popular in 1.2-litre petrol turbo guise. Jonathan Crouch tries it.

Vauxhall needed competitive representation in the growing SUV C-segment and this Grandland X provides it. The drive dynamics of this 1.2-litre petrol turbo version aren't particularly involving but it's one of the most spacious and efficient contenders in the Qashqai class and sets itself apart from rivals with a clever OnStar media connectivity and concierge system. This car won't be a magazine favourite but the truth is that a lot of boxes are ticked here.

Yes, it's another family-friendly SUV and yes, this time, it's a Vauxhall, this Grandland X the largest model of this kind in the Griffin brand's newly rejuvenated crossover range. It shares all its engineering with its group cousin and close rival, Peugeot's 3008 and since that model was crowned the 'European Car of the Year' at its introduction, the prospects here seem encouraging. Products like this will be key for a manufacturer that's gradually having to re-invent itself. Of course, to realise its production objectives, this car must attract conquest sales from other more established brands in this sector, so it needs something to help it stand out. Hence the standard fitment across the range of Vauxhall's clever and still rather unique 'OnStar' personal connectivity and service assistant set-up. Add to this to the more familiar attributes of models in this segment also offered here - things like visual personalisation, efficient engines and, in this case, a neat 'IntelliGrip' system to enhance traction on slippery surfaces - and the Grandland X proposition seems, as we've suggested, to be potentially promising. Let's try this car in its volume 1.2-litre petrol turbo form.

We'd anticipate that your expectations of a car of this kind when it comes to drive dynamics will probably be pretty modest. You'll want quite a commanding driving position, a comfortable ride, reasonable refinement, decently responsive engines and, well, that's likely to be about it. If you're after a C-segment SUV that you can throw around a bit, then this one certainly won't suit. Take a more typically relaxed approach though and everything becomes much more satisfactory. It soaks up bumps and tarmac tears that would trouble many rivals. Plus it's relatively quiet and easy to manoeuvre, particularly around town where the light steering that hampers you at speed becomes a boon. That slightly raised driving position is delivered - but not to the point where acclimatisation would be required if you were moving into a model like this from something more conventional. Under the skin, this Vauxhall shares almost everything with its two PSA Group cousins, Peugeot's 3008 and Citroen's C5 Aircross. That includes its 'EMP2' platform and a range of engines that see mainstream buyers choosing between the 130bhp 1.2-litre three cylinder turbo petrol unit we're trying here or a frugal 120bhp 1.6-litre four cylinder diesel. This petrol powerplant makes 62mph from rest in 11.1s en route to 117mph and both engines come with the option of a 6-speed automatic if you don't like the not especially sweet-shifting 6-speed manual gearbox provided as standard. There's no 4WD option, but you can pay extra for an 'IntelliGrip' system that'll give you a choice of modes that'll improve front wheel traction on slippery surfaces. 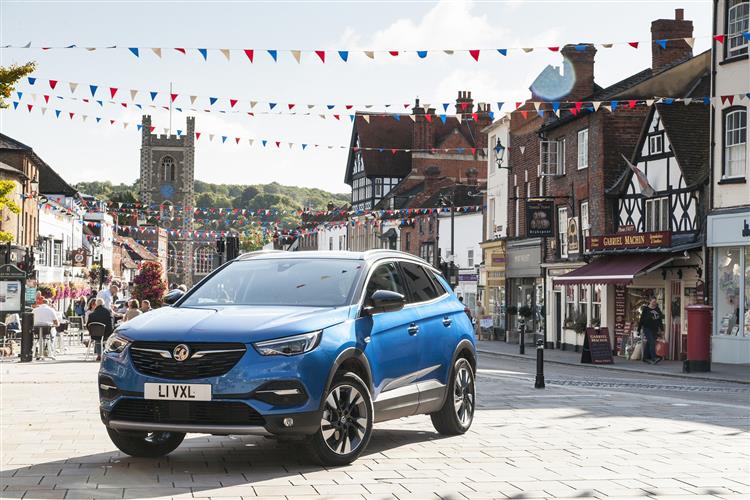