With this i30 N hot hatch, Hyundai launches its new 'N' performance sub-brand. It's the kind of car you simply wouldn't expect from this Korean maker, with a choice of either 250 or 275PS outputs intended to provide performance to embarrass this car's Volkswagen Golf GTI arch-rival.

Hyundai is getting serious about performance. For proof, take a look at this i30 N hot hatch, developed by a team led by former BMW M Power boss Albert Biermann. It's undergone a lengthy testing period that included over 6,000 miles of running on the legendary Nurburgring Nordschleife racetrack and it aims to slot right in amongst the established players in the volume part of the family hatch-sized GTI segment. The 'N' in the model name stands not only for 'Nurburgring' but also for 'Namyang', Hyundai's vast research and development centre back in South Korea.

The stats certainly look promising. Beneath the bonnet, you'll find a 2.0-litre turbocharged four-cylinder engine, delivering 250PS and 353Nm of torque. In the uprated 'N Performance' model, that output is boosted to 275PS. As a point of comparison, the most you can get from a Golf GTI is 245PS - and that's only if you pay extra for a 'Performance Pack' on that car. The i30 N is front-driven - there's no sign of a 4WD option - and if you're quick with the 6-speed manual stick shift, 62mph can be reached from rest in just 6.1s en route to 155mph in the 250PS variant. The single gearbox option, a 6-speed manual stick-shift, has been specially developed for this car and its clutch is uprated. There's also a selectable rev-matching system to make you sound like Fernando Alonso when you're downshifting through the gears. As segment buyers will expect, 'Launch control' for 'Grand Prix'-style getaways and a rev-matching function both feature in the standard spec, plus there are five selectable driving modes and an electronically managed suspension set-up. An 'N button' will switch the car into its most dynamic setup and drivers can tailor settings through an 'N Custom' mode. With the standard 'N Performance' package, you get an electronic limited slip differential, plus beefy brakes, a variable valve exhaust system, and larger 19-inch wheels shod in Pirelli P Zero rubber. The handling of this variant was perfected at the legendary Nurburgring Nordschliefe race track - and you'll feel like you're on a circuit when you're pressing on behind the wheel, thanks to an Electronic Sound Generator that creates a rorty engine note. 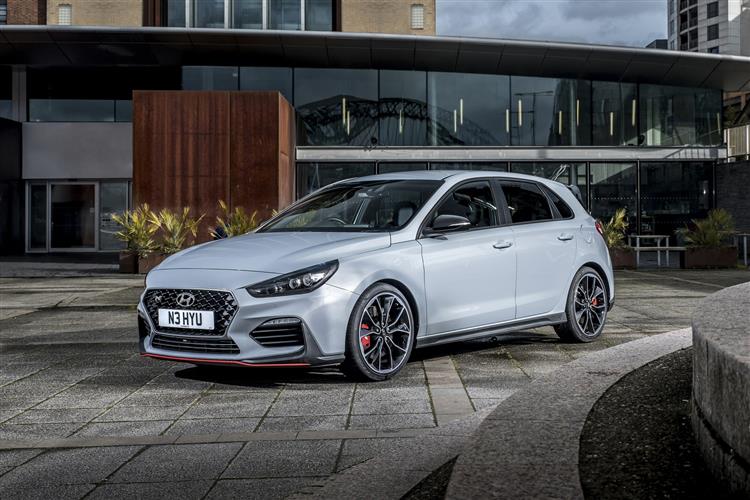