DONE TO A T (some text hidden)

The seventh generation Ford Fiesta gets a much more appealing petrol engine, a 1.1-litre Ti-VCT unit, which slots in at the foot of its range. Jonathan Crouch takes a look.

This seventh generation Fiesta has grown up a bit, but it hasn't lost the youthful, eager feel that endeared previous generation models to so many supermini buyers. Beneath the smarter styling lies some clever user-friendly technology - and cabin quality that'll make down-sizing into one of these less of a chore. It also features a much more competitive entry-level petrol engine, a three cylinder 1.1-litre Ti-VCT unit.

What's been the world's most significant car in the last half a century? This is our nomination, Ford's Fiesta, rejuvenated here in MK7 model guise for a fresh generation of buyers. Believe or not, the bodywork's completely new; so is the suspension - and as a result, the driving dynamics are promised to be even better than ever. There's a brand new interior fashioned with much higher quality. And buyers will benefit from a fresh era of media connectivity and camera-driven safety technology. One of the most important changes over the previous model though, was the ditching of that old car's thirsty, inefficient four cylinder 1.25-litre petrol engine. In the place of that powerplant, entry-level buyers now get the three cylinder 1.1-litre Ti-VCT unit we're going to look at here, offered in either 70 or 85PS guises.

Variations on the Fiesta theme may come and go, but before driving any version of Ford's definitive supermini, there's one thing you almost always tend to know for certain: that it'll be a great steer. This time round, the Blue Oval brand has sought to retain that traditional Fiesta attribute, yet at the same time, introduce a standard of ride quality closer to that delivered by arch-rivals like Volkwagen's Polo. Out on the road, in some ways, this car isn't quite the sharp, eager thing we remembered from before, but it can still offer a level of handling joie de vivre that's beyond anything its competitors can manage. That's thanks to improved steering, a lightweight body that's now usefully stiffer and an effective torque vectoring system that helps you get the grip down in the corners. Engine-wise, all the volume petrol units are now three cylinder in configuration, the line-up propped up by the new 1.1-litre Ti-VCT powerplant we're looking at here, available with either 70 or 85PS. This engine borrows from much of the brand's EcoBoost technology and has been mated to a manual gearbox that we're told has been freshly-developed for it, despite the fact that it soldiers on with only five speeds. The base 70PS 1.1 Ti-VCT variant manages 62mph from rest in 14.9s en route to 99mph, while the 85PS version improves those figures to 14s and 105mph. It is a bit disappointing though, that with this engine, Ford hasn't fitted the rear disc brakes you get in most other models. 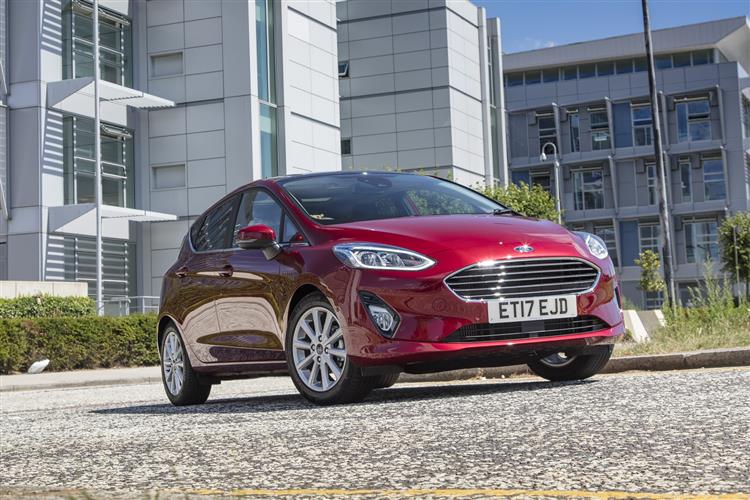