The Ford GT supercar shows us everything that the Blue Oval brand's Performance division is capable of. Jonathan Crouch takes a look at it.

A new low-volume assembly facility at Multimatic in Ontario, Canada assembles a very special car: the Ford GT. It's supposed to be the finest supercar that Ford has ever made - and it might just be that.

The Ford GT supercar will almost certainly be one of the rarest and most collectable Fords ever. The brand insists that only 250 will be made each year and there are no shortage of buyers, following 2016 track success which saw this car take first, third and fourth place in its class at the Le Mans 24 Hour race. The car is the brainchild of the Ford Performance division, the people who've already bought us models like the Fiesta ST, the Focus ST and the Focus RS. It's a successor to the GT model of the same name, launched in 2005. The latest car's styling harks back to that design, as well as to the Ford GT40 supercar from the 1960s. But it also has very much its own look and feel, with huge vents and buttresses that channel air to cool the car and improve aerodynamic grip at high speed.

We've yet to drive this car but on paper, the prospects look very promising. The 3.5-litre EcoBoost V6 engine develops over 600PS and is based on the unit used in the Ford GT Le Mans race car, though Ford promises that the production powerplant has a wider power band, making it more useable on the road. The engine is mated to a seven-speed dual-clutch automatic gearbox, which Ford says offers "near-instantaneous gearchanges and exceptional driver control". As for performance, well it's likely that the Ford GT's 0-62mph time will be in the region of three seconds, while top speed will be in excess of 200mph. Clever aerodynamics channel air coming into the nose of the car through large ducts running on either side of the passenger compartment, evacuating it all behind the engine. The result generates astonishing amounts of downforce. The brakes are carbon-ceramic, so they're ideal for the kind of heavy usage that owners will encounter on a race track. The suspension has also been designed with racing in mind and uses the same sort of technology and principles seen in Formula One. 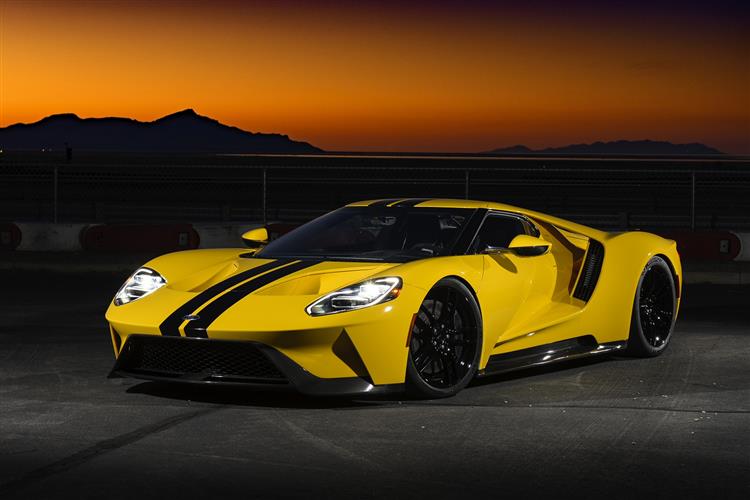