CHANGING OF THE GUARD (some text hidden)

The Mercedes E-Class has never been sexy. Until now. In the pumped-up, slickly-finished form of the Mercedes-AMG E 63, here is a car that makes its rivals look a little one-dimensional. With a power punch that's up to 612bhp, it's devastatingly quick and you can expect a soundtrack that'll be utterly addictive. Choose from either a saloon or an estate bodystyle.

Traditionally, if you wanted the best executive super saloon or estate, you always bought a BMW M5. That was the way it was and has always been until now. Yes, you could buy an Audi RS6 or a Jaguar XFR and not look as if you'd made a complete horlicks of your car buying decision but if you wanted the best, you turned to Munich. Mercedes-Benz had made some hot versions of the E-Class down the years but they were often all go and no subtlety, heavy, uncommunicative things that didn't reward the skilled driver. Yes, they worked well if you had an autobahn to crack along, but they seemed the automotive equivalent of a flat track bully. AMG, the go-faster division of Mercedes, has come good in recent years. It has engineered tactility and subtlety into its products and nothing shows this off better than the transformation of the AMG-branded E-Class. This latest 4.0-litre Mercedes-AMG E63 is a vehicle that doesn't just deserve consideration. It's now the car that the rest of the class has to measure up to. It's quite a big ask.

It's going to be hard for long-time E 63 buyers to accept the fact that a big normally aspirated 5.5-litre V8 no longer beats beneath the bonnet of this car. You still get a V8 though - just a smaller, more efficient turbocharged one. And a unit that puts out more power than before. The output of this car has risen from 557 to 571bhp. There's also a pokier E 63 S version that puts out 612bhp. Both derivatives sprint from rest to 62mph in about 3.5s and feature 4MATIC 4WD to help get all that torque to the tarmac. There's plenty of it too - 750Nm in the standard model or 850Nm if you go for the 'S' version. As for transmission, well Afalterbach has developed a new 9-speed AMG SPEEDSHIFT MCT auto transmission for this car. The 'S' model also offers a 'drift' mode as part of a 'Race' programme you can select using the gearshift paddles. Dynamic engine mounts, AMG Sport speed-sensitive steering, AMG air suspension and an AMG high-performance braking system are all included. So is the AMG DYNAMIC SELECT drive programme system so that you can set the car up to suit the way you want to drive. Expect the result of all this technology to be utterly addictive. The E63 has long tried - and failed - to offer a class-leading alternative to BMW's M5: in this form, the Merc may just have pulled it off. 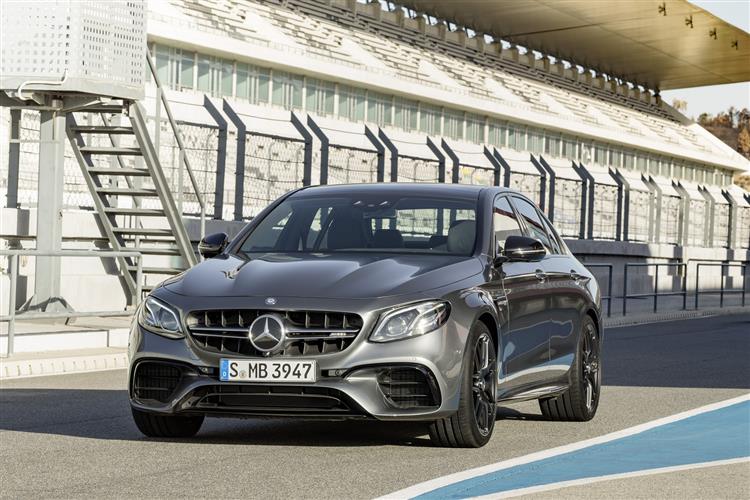