SHOWING ITS METAL (some text hidden)

Defying expectations, the Mazda MX-5 RF Retractable Fastback might just be an even better bet than the standard roadster model. Like that variant, it now gets a more power. Jonathan Crouch takes a look at what's on offer.

It would have been incredibly easy for Mazda to ruin the MX-5 by putting a folding hard top roof on it. Just as well then that instead of rushing this concept to market, the Japanese company did a proper job on this car. It's not just an MX-5 with a different roof. Mazda have managed to imbue the RF derivative with a more mature feel without losing the fun factor. More power for the 2.0-litre version is the finishing touch.

Cars with folding hard top roofs can be rather grotty things. Curiously malformed with distended bottoms and pinched cabins, they usually lose their looks and their practicality once the roof's up and all you're left with is toothbrush room in the boot once the hood has done its contortionist's trick. Oh yes, these cars offer the customer more. More weight, more complexity and more expense, that is. Therefore, we shuddered when Mazda first announced a 'Retractable Fastback' 'RF' version of its fourth generation MX-5. Seems we needn't have worried after all. It's the exception that proves the rule. Utilising the basis of an existing MX-5, Mazda managed to build a car that will appeal to a subtly different audience. For many metropolitan types, parking on street is a way of life but the hard-topped RF variant offers additional security and is vandal-proofed in a manner that no fabric-roofed car can be. It's also a little more refined than the soft-top model.

Under the bonnet, this RF model gets the same two powerplants available in the standard MX-5. That means it's offered with either a 1.5-litre 132PS engine or an uprated 2.0-litre 184PS unit. As with the ordinary roadster variant, all models powered by the 2.0-litre 184PS engine feature a limited slip differential and 17-inch wheels. Top versions feature Bilstein dampers and a strut brace to further enhance their dynamic set up. This fourth generation MX-5 design conforms to five key criteria that Mazda claim define this model line - rear drive with a front-mid engine layout, 50/50 weight distribution and an eagerness to change direction, plus a low kerb weight and an affordable price. Most RF models get six-speed manual gearboxes but Mazda is also offering a paddleshift auto option at the top of the range for the few that want it. As you would expect, the suspension and electric power steering parameters of the MX-5 have been specifically tuned for the Retractable Fastback version. In addition, a sound-absorbing headliner used in the front and middle roof panels combines with sound insulation around the rear wheel housings to deliver a significantly quieter cabin when the roof is closed. If you want to open the top, this can be done on the move at speeds of up to 6mph. 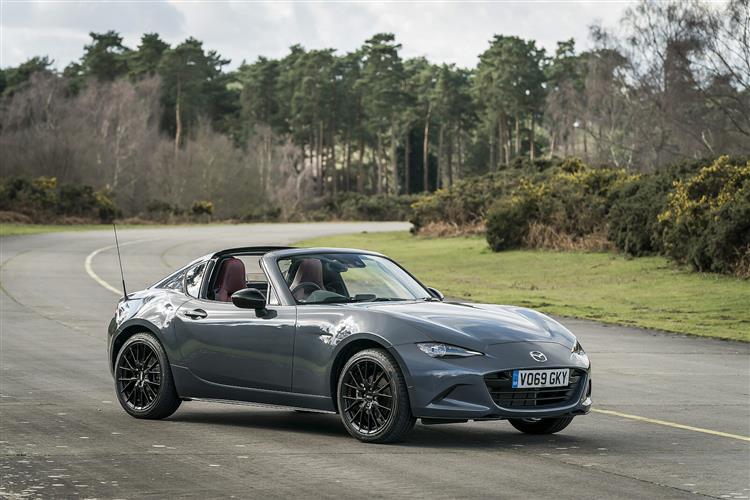