SOCKET TO 'EM (some text hidden)

The second generation plug-in version of the Toyota Prius is a much more credible contender in the growing market for plug-in hybrid models. It can run up to 29 miles on pure electric power (twice as far as its predecessor) and EV power is up by 83% thanks to a freshly-developed Dual Motor Drive System. It's the faintly unbelievable figures though, that could sell you on this car: fancy 217mpg on the combined cycle and 29g/km of CO2? Thought so.

A little forgotten today is the fact that it was Toyota who were first to develop the whole concept of Plug-in hybrid motoring. Perhaps the reason for that is that the company's initial contender in this segment, the first generation Prius Plug-in, was so relatively uncompetitive. Not only was it prohibitively expensive but it would only at best travel around 15 miles on all-electric power. Not good enough. So Toyota has gone away and come up with something better in the form of this far more competitive second generation version. This MK2 model matches the class standard for all-electric driving range and develops far more power from its larger lithium-ion battery thanks to technological improvements in three key areas: battery development, maximised EV driving performance and increased battery recharging speed. The car also handles better and looks far smarter with its second generation Prius styling. Let's check it out.

Go for the standard Prius model with its old-tech nickel metal hydride battery and you'll find that it doesn't go very far on battery power alone. From start off, it's great fun to waft around in virtual silence, but you only need to have gone a mile or so down the road before the petrol engine thrums smoothly into life. This Prius Plug-in model is different. It gets a more sophisticated lithium-ion battery that can be charged from the mains, a unit that's twice as large in this second generation model, its capacity having increased from 4.4 to 8.8kWh. The downside of that is a 50% increase in battery weight, but thankfully, the bulk has been mounted very low down in the vehicle, which helps keep an admirably low centre of gravity. All-electric driving range is rated at around 30 miles, though you won't get anything like that if you start to really use the increased EV power of this MK2 model. This has risen by 83% thanks to a new Dual Motor Drive System that boosts EV driving power to 68kW, giving better acceleration and more engaging performance. The handling's more engaging too, thanks to this second generation design's use of Toyota's New Global Architecture platform. This stiffer set-up reduces bodyroll and improves refinement. 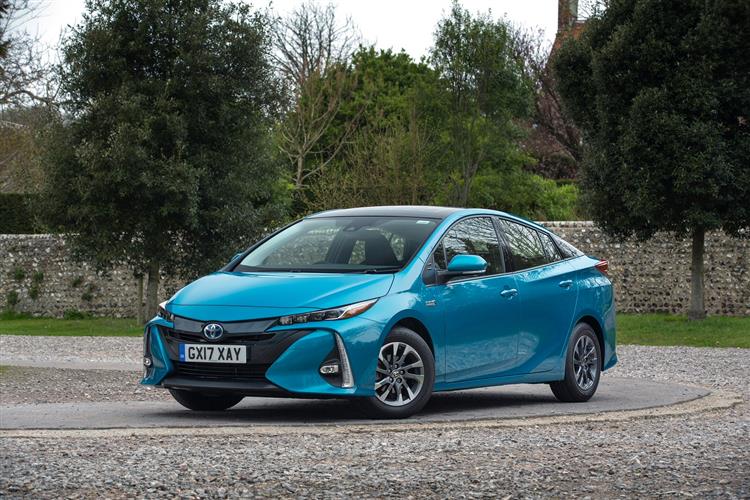