OPEN TO EXCITEMENT (some text hidden)

The Mercedes-AMG GT Roadster looks to be a deeply desirable open-topped supercar if you're the kind of buyer who wants a real experience at the wheel. Jonathan Crouch looks at what's on offer from the revised range.

The AMG GT Roadster is a classic open-top supercar that builds purposefully on the heritage of its SLS predecessor. It's uncompromising, intoxicating and very, very fast. Plus the brand has gradually broadened the range of engine options too.

The first Mercedes was a racing car. Ever since, the brand has had competition in its bloodline, drawn upon throughout a rich history of motorsport-orientated coupes and convertibles. Cars like this one, the Mercedes-AMG GT Roadster. Mercedes-AMG is a brand that enthusiasts may now be used to, its primary focus being the creation of high performance versions of usually mundane Mercedes models. Every so often though, this Affalterbach division gets let off the leash to do its own thing and on the first occasion that happened, we got something very special - the SLS of 2009. The follow-up to that car was the Mercedes-AMG GT coupe model of 2015, which aimed to replicate its predecessor's level of excellence at lower prices and with much greater production volume. Here, in the form of this Roadster model, we've got the open-topped version of that car.

As with any AMG model, it's the engine that defines this car, a 4.0-litre biturbo V8 offering 476hp in the base 'GT' model, 522hp in the 'S' model, 557hp in the 'GT C' variant and 585hp in the top GT R model. In all its forms, it's a glorious-sounding powerplant with a lavishly intoxicating soundtrack that will never let up. The GT R variant gets to 62mph in just 5.3s en route to 197mph if you find yourself a track or an empty autobahn. All this frantic potential is harnessed by an 'AMG SPEEDSHIFT DCT' 7-speed paddleshift auto gearbox with transmission toys that include a 'RACE START' launch control feature and software that blips the throttle on downshifts to the evocative accompaniment of popping and banging from the switchable AMG Performance exhaust system. The exhaust note is one of the parameters influenced by the various settings of the car's 'AMG DYNAMIC SELECT' driving mode system, this being one of those set-ups that can alter throttle response, steering feel, gearshift timings and stability control thresholds to suit the way you want to drive. On the 'GT C' and 'GT R' variants, the set-up controls the damping too, courtesy of an 'AMG RIDE CONTROL' adaptive damping system we think you'll need to keep this car in check at speed over bumpier surfaces. It's on roads like these that you'll also appreciate this car's rear axle differential lock, a feature that's electronically-controlled in these top models for quicker response. 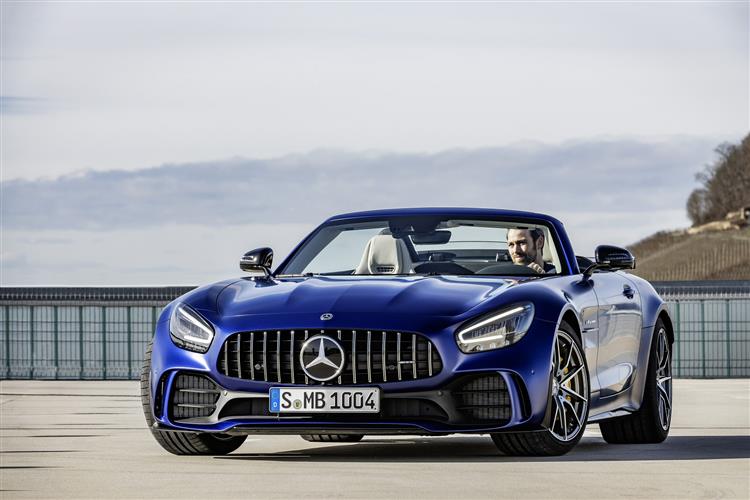