GOING FOR AN ITALIAN (some text hidden)

Fiat aims to offers a much stronger option to buyers in the mid-sized van segment with this more sophisticated and spacious Talento model. Jonathan Crouch checks out what's on offer.

If your business is trying to decide between an affordable compact-sized van and a spacious larger one, Fiat's Talento could prove to be the perfect compromise between the two. It's as spacious as most users will ever need, yet affordable, both to buy and to run. Transit Custom and Vauxhall Vivaro-class buyers need to consider it.

Fiat's LCV sales have been growing steadily over the last decade thanks to a vast investment in new product which now sees its Professional van line-up offer businesses everything from a 2.5m3 Fiorino van to a 17m3 Ducato. The Transit Custom-sized Talento model we're looking at here lies somewhere in the middle of this little lot and claims to offer all the benefits of a very large van with the affordable running costs of quite a small one. This LCV is better placed than its Scudo predecessor to compete with a whole army of mid-sized rivals. Not only the Transit Custom but also tough competitors like Volkswagen's Transporter, Vauxhall's Vivaro, Renault's Trafic and Mercedes' Vito. Taking on this lot isn't something you'd want to do single-handed, so the Italian brand has chosen to share this design with both Citroen and Peugeot, whose Dispatch and Expert models are pretty much identical but have different engines. With this Fiat, you get clever design, proven powerplants and low running costs in a package that certainly works on paper. Whether it'll cut the mustard day-in-day-out though is what we're here to find out.

Vans have been becoming more and more car-like in recent years - and this one is no exception. The driving position, though not as high-set as you'd find in the marque's larger Ducato model, is nonetheless commanding. And it's comfortable on the move, coping admirably with the atrocious surfaces offered up by poorer sections of the British road network. That relaxed approach also extends to the electric power steering, which at speed, could offer a bit more feel. You appreciate its lightness around town though, where this van is impressively manoeuvrable for its size. If you're used to very big vans, you will have to adjust to this one's lower stance. This, combined with the big front overhang, can initially make parking a bit tricky, though rearward vision is helped hugely by the huge door mirrors with their separate wide-angle reflectors. Under the bonnet, the Talento gets a range of efficient 1.6-litre turbo and twin-turbo diesel engines, all equipped with a six-speed manual gearbox as standard. There's a choice of two engine design themes - single-turbo MultiJet units or more efficient but pricier twin-turbo Ecojet powerplants. The MultiJet models come with 95 or 120bhp. The Ecojet options come in 95, 125 and 145bhp forms. 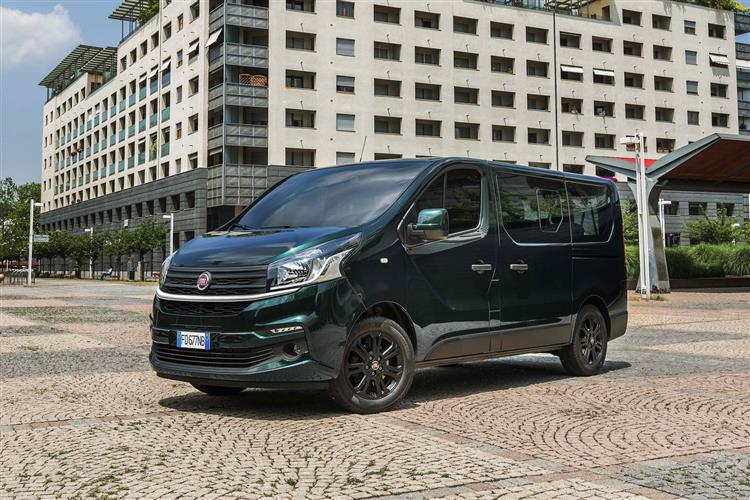