A SMART PIECE OF BUSINESS (some text hidden)

So you want a mid-sized SUV with a prestigious badge; but you'd like a more dynamic-looking one. Something like a BMW X4, a Range Rover Evoque - or perhaps this car, Mercedes' GLC Coupe. Jonathan Crouch looks at the revised version.

Mercedes used its GLC mid-sized SUV as a base for this sportier, more stylish GLC Coupe variant - and has now improved this stylish package. It's better to drive as well as being sporty to look at and the practical compromises necessitated by the sleeker shape are relatively modest. Providing you can afford the asking prices, you'll find that the sensible stuff adds up too.

A decade ago, the whole idea of an 'SUV coupe' sounded ludicrous. Then BMW came along with their X6 and suddenly, the concept didn't seem quite so silly. And it definitely didn't once the Bavarian brand revealed sales figures that showed that car was striking a resounding chord with better-heeled buyers. So successful was it that in 2014, BMW revealed a smaller X4 model, essential a coupe version of their X3 compact SUV. Mercedes were watching and, having copied the X6 with their GLE Coupe, the Stuttgart brand in 2016 announced its own spin on the X4, the GLC Coupe, a car substantially improved in Spring 2019 to create the car we're going to look at here. This car's opposition extends beyond the X4 of course. Potential buyers will also be looking at style-conscious small SUVs like Range Rover's Evoque - and maybe even at Porsche's Macan. Should they also take this Mercedes into account? Let's see.

Despite its more dynamic looks, you shouldn't expect a GLC Coupe to be really any more dynamic to drive than its hatch stablemate. As with that car, air suspension can be added at extra cost. This option is desirable. 'AIR BODY CONTROL', as Mercedes call it, promises a cosseting ride when you want luxury or flat, sports car-like handling when you're in a hurry. All models feature 4MATIC 4WD. For highway use, there are now more semi-autonomous driving assistance systems. Active Distance Assist DISTRONIC and Active Steer Assist provide even more support to help the driver to steer and to keep a safe distance. Under the bonnet, Mercedes has worked on making the engine range more powerful and more fuel efficient than before and the mainstream part of the line-up is based around four-cylinder units and drive will be supplied through a standard 9-speed automatic gearbox. A 2.0-litre turbocharged petrol unit features in the 258hp GLC 300, which now uses the Mercedes' EQ 48-volt mild hybrid system. Here, there's an integrated starter/alternator unit that can recover up to 10kW of energy when decelerating, which can then be deployed below 2,500prm to reduce the effort required of the combustion engine. The two main diesel options are the 194hp GLC 220d and the 245hp GLC 300d, which get the brand's latest 2.0-litre diesel, replacing the previous 2.1-litre unit. At the top of the range sits the fearsome Mercedes-AMG GLC 63 4MATIC+ which uses a 4.0-litre petrol V8 offering either 476hp or 510hp. 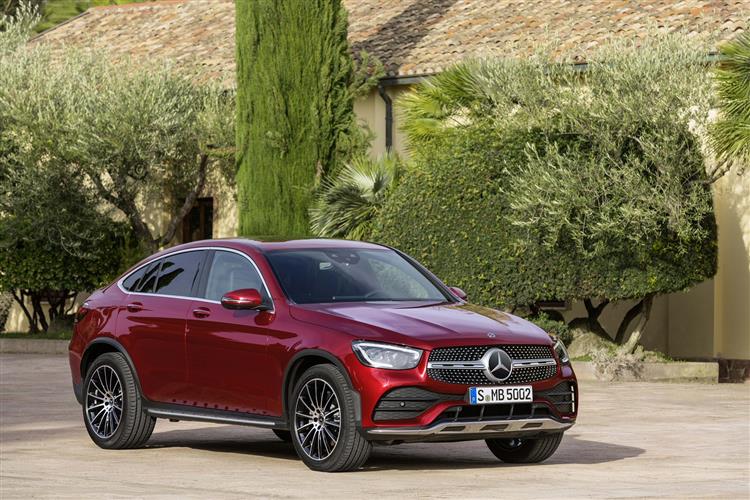