The improved sixth generation version of Ford's Mustang can be ordered with an engine you might be much more likely to bond with in the real world. Jonathan Crouch looks at the 2.3-litre EcoBoost version.

If any further evidence was needed that Ford wants the improved sixth generation version of its Mustang sportscar to be a world-orientated model, the existence of this 2.3-litre four cylinder variant provides it. A Mustang you could actually call 'sensible'? Surely not..

It seems almost sacreligious to order something like a Ford Mustang with a four cylinder engine beneath the bonnet. It might make more sense though. Yes, the 5.0-litre V8 you can still get in this car sounds great - but it will also leave you spending most of your time achieving sub-20mpg fuel economy figures, while the CO2 returns will put a serious dent in your tax return. In contrast, a Mustang with 2.3-litre four-pot power can deliver over 31mpg and 199g/km of CO2: quite a difference. If you're still wavering, it might help to know that the 2.3-litre EcoBoost engine on offer here is the same on that the Blue Oval brand used with its fiery Focus RS uber-hot hatch: or nearly the same anyway. If you've decided on a Mustang but not on the engine that will power it, it might all be enough to give you pause for thought. Especially once you start to consider the changes made to his improved model, which include smarter styling, a classier interior, fresh engine modes, improved media connectivity, extra safety provision and the option of a new 10-speed auto gearbox.

Choose the turbocharged 2.3-litre 'EcoBoost' four cylinder unit we're looking at here and you get a free-revving 290PS motor that offers 440Nm of torque and blends 0-62mph in 5.8 seconds with up to 31.4mpg combined fuel consumption. That's pretty much the best of both worlds, but we wouldn't blame anyone for picking the more charismatic 450PS 5.0-litre V8 with its subtle burble and 0-62mph in just 4.3 seconds. However, the 23.3mpg returns on offer with the V8 won't appeal to everyone. Still, whichever variant you prefer, you get a performance car that goes, stops and even handles in a manner sure to surprise drivers used to European alternatives. As for driving dynamics, well Ford claims to have improved these for European buyers with this enhanced model. Recalibrated shock absorbers should improve stability through corners, while the rear suspension has been stiffened with a cross-axis joint that reduces unwanted movement at each corner that can lead to body flex. Thicker anti-roll bars also better control body-roll for sharper handling. A new optional MagneRide Damping System can deliver a lightning-quick response to changing road conditions. Plus there are two new Drive Modes in addition to the usual 'Normal', 'Sport', 'Track' and 'Snow/Wet' settings. 'Drag Strip Mode' optimises performance for maximum acceleration from standing starts. And 'My Mode' enables drivers to select their own preferred settings for performance, dynamics and exhaust sound. There's a new optional ten-speed automatic gearbox that'll be a better choice if you've occasionally got to erngage in city driving, while a slick-shifting six-ratio manual transmission option emphasises this Ford's sporting side. However you drive, it, the Mustang makes light work of lumpy roads and keeps noise at bay at higher speeds, whether you're in the Fastback coupe or a Convertible variant with the roof up. 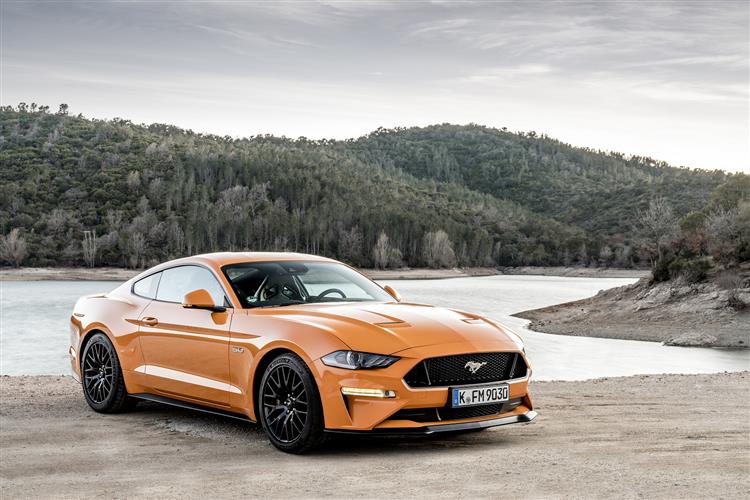