SIX TO THE POWER OF C (some text hidden)

The C 43 is a more sensible sort of Mercedes-AMG C-Class - but it's still pretty quick and capable. Jonathan Crouch checks out the revised version.

For those who like the idea of a fire-breathing V8-powered Mercedes-AMG C 63 but need a version of that car that's less expensive to buy and to run and features four driven wheels, the Stuttgart brand offers this, the V6-powered Mercedes-AMG C 43 4MATIC. Like its quicker stablemate, this model comes with a choice of saloon, estate, coupe or cabriolet bodystyles and has now been improved, with an uprated 390hp output.

'All or nothing' was always the Mercedes motto and it's tended to apply when the brand turns its hand to performance versions of its most popular models. Take the C-Class. Until quite recently, there was very little between mainstream versions of that car and its top super-fast V8-powered C 63 AMG derivative. Rivals don't work like that. Audi, for example, eases the gap between mainstream A4 models and an RS4 with its S4 model. In the same way, BMW provides an 'M Sport'-trimmed 340i as a stepping stone to its M3 and M4 models. In 2015, Mercedes realised that it needed to plug that gap too - and did so with the original version of this Mercedes-AMG C 43. To start with, this car put out 367hp from its 3.0-litre V6 biturbo engine, but this unit was uprated to 390hp as part of a package of changes made for the 2018 model year that have created the C 43 range we're going to look at here. As before, the car gets the 4MATIC 4WD system that you can't have (in our market anyway) on the V8 C 63.

Don't be fooled by the C 43's name. Traditionally, AMG-powered cars are named after the size of the engines that sit under the bonnet. However, this Mercedes-AMG C 43 gets a 3.0-litre twin-turbocharged V6 petrol engine which now develops 390bhp (23hp more than before) and a lusty 520Nm of torque. That all means that it will rocket you from zero to 62mph in just 4.7 seconds in saloon or Coupe guise, while the Cabriolet does the same in 4.8s and the estate registers 4.9s. All derivatives will push on to a limited top-speed of 155mph. That's performance quite justifying the positioning of this variant as the next step down in the C-Class hierarchy from the potent V8-powered C 63. In fact, in some ways a C 43 is more desirable that a C 63 for unlike its V8-powered rear-driven stablemate, it comes with 4WD as standard to better get torque to the tarmac. The 4MATIC set-up used still retains a rear-wheel drive bias, with 69% of the power being sent to the back and 31% to the front. You get a smoother auto gearbox than you would in a C 63 too - and the 9G-TRONIC PLUS unit offers more ratios and can allow you to perform multiple downshifts for quicker, short bursts of power. The C 43 package includes sports suspension with adaptive damping variable across up to five modes. 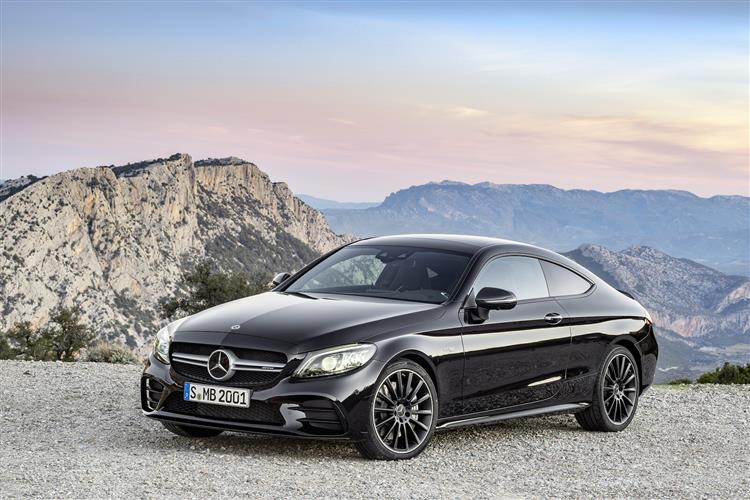