BMW has developed a much improved plug-in hybrid version of its flagship saloon, the 7 Series, the 745e, to challenge Mercedes in the full-Luxury saloon segment. Jonathan Crouch takes a look at what's watt.

Can't decide between the performance of a petrol-powered 7 Series and the frugality of a diesel-powered version of this model? What if you could have both? In this case, the 740i's 3.0-litre petrol 'six' mated with a 113hp electric motor powered by a 12kWh lithium-ion battery secreted under the rear seat. That's the recipe promised by the 745e Plug-in hybrid version of this 'Seven', which is the first BMW Plug-in model to use an engine larger than four cylinders.

We've had petrol/electric engines in cars of this kind since Lexus launched an LS hybrid back in 2007. The competition took time to respond, but BMW were the first to react, launching an Active Hybrid 7 Series model in 2012, then a Plug-in 740e iPerformance model in 2015. It's this technology that the 745e claims to have perfected. As with the outgoing 740e variant, there are three main driving modes: 'Sport', which sees the engine and electric motor combining for maximum performance; 'Electric' which powers the car using the electric motor alone, while the battery charge lasts; and 'Hybrid', which uses a combination approach depending on your driving needs.

The original version of this 'G11'/'G12'-series model offered a plug-in option, but mated its electric motor to a little four cylinder engine, which wasn't very 7 Series-like. With this revised model, badged the 745e, the Munich maker has found a way of making the plug-in formula work with the 740i's 3.0-litre 'six'. And matched a 113hp electric motor up with a 12kWh lithium-ion battery whose larger capacity makes possible an electric-only driving range of up to 36 miles (13 miles more than the old four cylinder 740e model could manage). The potential all-electric top speed's higher too - theoretically possible at up to 87mph. With the engine joining in and the drive system's 'Sport' mode activated, 62mph in a 745e is dealt with in just 5.2s, which is virtually as fast as Mercedes' much more powerful S560eL plug-in rival. As before with a 7 series plug-in, buyers get the choice of either a short wheelbase rear-driven variant, or a long wheelbase xDrive model. Like other 7 Series models, the suspension set-up is an advanced 2-axle self-levelling air sprung system. And the petrol powerplant works with a standard 8-speed Sport Steptronic automatic gearbox and is whisper quiet, with refinement aided by extra noise suppression and thicker laminated window glass. This model's traction and agility can be further improved with an optional xDrive 4WD system. 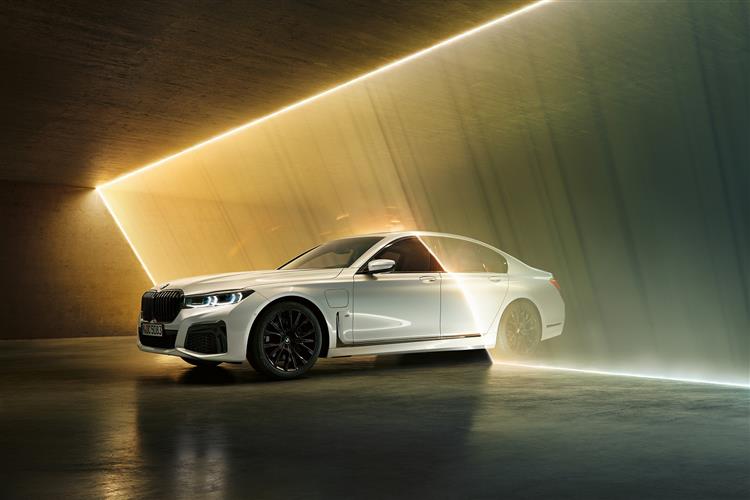