The pretty Mercedes C-Class Cabriolet gets an improved engine range and extra cabin tech in its latest form. Jonathan Crouch looks at what's on offer.

On the road, this C-Class Cabriolet comes with a multi-layered fabric roof that can activate in less than 20s at speeds of up to around 30mph. Once the hood is unclipped and on its way backwards, what Mercedes calls an 'AIRCAP' draught stop system springs up on the windscreen header rail. At the same time, a wind deflector can glide up behind the rear seats and together, these two elements are very effective in limiting cabin buffeting at speed. That roof mechanism leaves this model is 125kgs heavier than the C-Class Coupe model it's based upon, extra bulk you really feel when you're pushing on around twisting secondary roads. On the plus side though, this Cabriolet is stable and very well balanced, aided by a standard 'DYNAMIC SELECT' driving modes system that not only tweaks the throttle and steering but also alters responses from the standard 'AGILITY CONTROL' adaptive suspension. Uniquely in this class, there's the option of upgrading the damping into a hi-tech air-suspended 'AIRMATIC' set-up. On top of that, mainstream variants get a 9G-TRONIC 9-speed automatic gearbox that's more sophisticated than anything the opposition can offer. With this revised model, the most important news is the introduction of fresh mainstream petrol and diesel engines beneath the bonnet. The range kicks off with the 156hp 1.6-litre petrol engine used in the base C180, but ideally, you'd begin your perusal of the line-up with a more modern unit, the 1.5-litre 184hp petrol unit fitted to the base C200, a model available in rear-driven or 4MATIC form. This powerplant features clever 'EQ Boost' technology which uses a 48volt on-board network with a belt-driven starter/alternator. There's also a 258hp 2.0-litre petrol variant, the C300. Many C-Class Cabriolet customers still want a diesel, usually the 2.0-litre 194hp powerplant fitted to the C220d variant, which can be had in rear-driven or 4MATIC form. There's also a C300d variant with the same engine tuned out to 245hp. At the top of the range lie the fearsome Mercedes-AMG models, offered with V6 or V8 power. The V6-engined C 43 4MATIC now puts out 390hp, 23hp more than before. That's enough to take a C 43 Coupe from rest to 62mph in just 4.7s. Beyond that lies only the V8 C63 S AMG model, with a 4.0-litre V8 Biturbo engine offering 510hp. 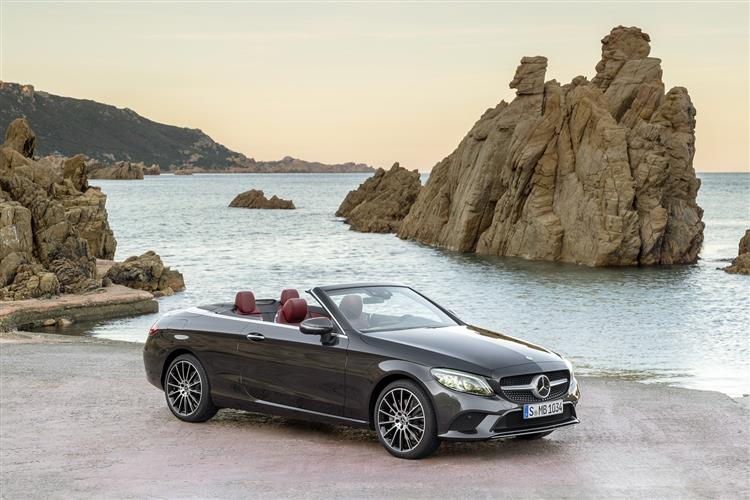