AN ACTIVE APPROACH TO EFFICENCY (some text hidden)

BMW's improved 2 Series Active Tourer five-seat compact MPV continues to feature the option of the Munich brand's latest Plug-in technology. It makes quite a difference too. The 225xe version of this car uses a BMW eDrive electric motor and a 1.5-litre three-cylinder BMW TwinPower Turbo engine to offer both an electric driving experience and unrestricted mobility. The resulting combined fuel consumption of up to 166mpg and CO2 emissions figure of 38g/km set a strong standard in the class.

If you like the idea of plugging in your family-sized BMW but you don't want something as unusual-looking as the company's i3 model, then your dealer will point you towards this car, the 225xe version of the brand's 2 Series Active Tourer five-seat compact MPV. You might be tempted to see this as an i3 in a more conservative set of clothes, but in reality, this 225xe is a rather different product. Whereas the i3 is a full electric car that can be optional ordered with a tiny range-extender engine, the 225xe is a proper Plug-in hybrid. This means that instead of the i3 Range Extender model's noisy bike engine, you get a proper 1.5-litre three cylinder TwinPower Turbo unit borrowed from a MINI that'll cut in once your 32 mile all-electric driving range is used up.

If you don't get around to telling your passengers that this 2 Series Active Tourer features cutting-edge Plug-in hybrid power, they probably won't guess. There's almost nothing about this car, either to look at or to drive, that proclaims eco-consciousness and green-friendly smugness - which is probably what potential buyers will like most about it. You might like to tell your business colleagues around the water cooler that the 1.5-litre TwinPower petrol turbo engine it uses is the same as that in BMW's i8 supercar: then again, you probably won't bother. That would draw attention - which is precisely what a typical 225xe owner wouldn't want. If you do put your foot down and use that MINI Cooper engine to its maximum, then things go pretty rapidly: 62mph is 6.7s away en route to 126mph. Better though to settle back and try and maximise the claimed 32 mile all-electric driving range. We say 'claimed' because it's unlikely you'll replicate that unless you drive like a nun. Around 15-20 miles is more achievable. Like all 2 Series Active Tourer models, this one drives through its front wheels in a very un-BMW-like fashion. 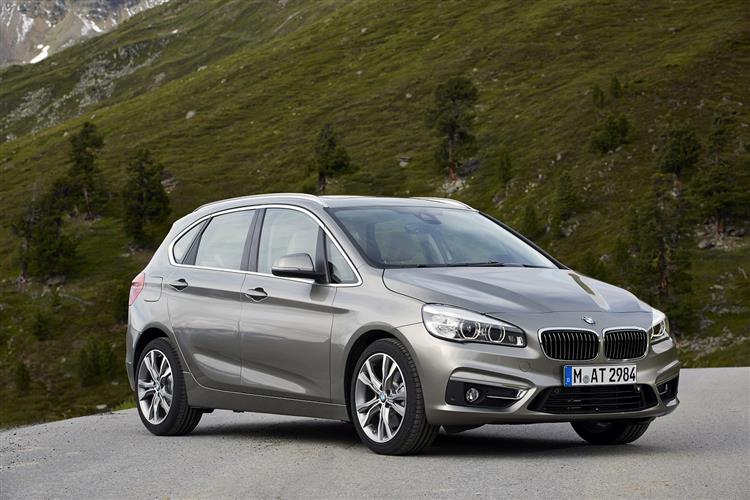