Can the replacement for the brilliant Ferrari 458 Spider retain its predecessor's magic, despite the switch to forced induction? The experts at Car & Driving check it out.

The Ferrari 488 Spider is the convertible variation of the 488 GTB coupe, both models replacing the Italian brand's gorgeous 458 Italia series. The key change here is the installation of more efficient turbocharged power but this 488 Spider has also been thoroughly redesigned in almost every other way to ensure that it will set a benchmark for the entire segment.

Ferrari's switch to a forced-induction engine for its mid-engined 488 GTB supercar was another moment of sadness for the automotive world. The sound and response on offer from the normally aspirated V8 in the brand's old 458 model made that car one of the best drivers machines money could buy. But Ferrari had to change. Rivals like Mclaren were already using smaller capacity turbocharged engines to good effect and Maranello had to follow suit. Using the 3.9-litre twin-turbo V8 from their California T, the Italian engineers designed and built the 488 GTB making sure the engine provided enough aural quality, feel and performance to take back the supercar crown. And you can appreciate that powerplant all the more in this open-topped Spider variant. It features a folding hardtop, allowing the driver and passenger to soak up even more of the experience and V8 noise.

Extensive changes to the aerodynamics and electronic systems mean the 488 Spider moves the game on even further than the magical 458. The aero tweaks provide more downforce without the need for any style-ruining spoilers, so its handling ability can match its monstrous performance. The SSC2 (side slip control) system allows for greater angles out of corners and is now linked to the dampers as well the E-Diff and the F1-Trac stability control system for greater control. The most significant change though, is the turbocharged engine. On paper, it should be incredible - the 661hp and 561lb/ft outdo the 458 by around 100hp and 160lb/ft and have less mass to propel thanks to a small drop in kerbweight. As with Ferrari's smaller California T model, the 488's engine doesn't give all its power immediately; torque is limited in the lower gears to prevent overloading the rear tyres and the full 561lb/ft is only available in 7th gear. This means that acceleration doesn't fade with each higher gear: it gets stronger. As expected with such a vast power increase and clever torque management, performance is bombastic. Try 0-62mph in 3 seconds dead and 124mph in 8.7sec before hitting a top speed of 203mph. The figures alone are hard to fathom: the 0-124mph very nearly matches its big brother - the F12 Berlinetta, a significantly more expensive and powerful car. Just in case you were worried that the retractable roof might affect handling, Ferrari ensured that the 488 Spider was engineered to provide as much torsional rigidity as the coupe. 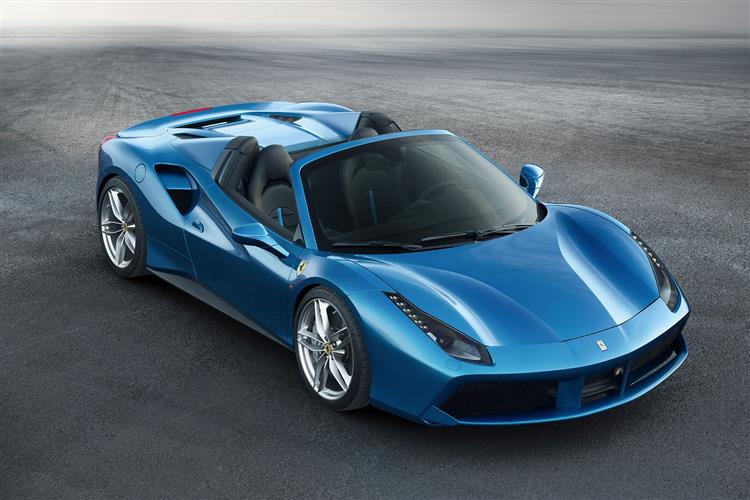