FERRARI GETS A BOOST (some text hidden)

For years, you could count on Ferrari for a screaming naturally aspirated supercar. Now though, a fresh generation of turbocharged models is promised, one of the first of these being this car, the gorgeous 488 GTB. Is the beguiling Maranello recipe on offer here still the same? Or is it even better. Car & Driving's experts check out what's on offer.

While the 488 GTB is in many respects a giant leap forwards for Ferrari, it is in essence a heavily facelifted version of its predecessor, the 458 Italia, albeit with a whole new powerplant. Facing competition such as McLaren's 650S and Lamborghini's Huracan, it promises a sizable increase in performance with a decent drop in running costs too.

If you ask a petrolhead to think about a Ferrari's engine, they'll probably have the soundtrack of an operatic V12 playing in their head. Ask them to name their favourite Ferrari car however, and many will no doubt choose that Eighties icon the F40 - the last Prancing Horse model to carry a mid-mounted twin turbo V8. While the F40 used turbos for performance, environmental concerns have these days forced Ferrari down the boosted route in search of efficiency, hence the 4.0-litre turbo V8 unit chosen for this 488 GTB. Sitting above the California T and below the F12, this model is aimed squarely at the junior supercar market that Ferrari has occupied with a mid-engined V8-powered design of some sort ever since 1975. The question is, can the 488 channel its inner F40 - or has Ferrari gone soft?

No-one ever complained the 458 Italia was a bit pedestrian yet Ferrari has still significantly increased motive power for this 488. The 670PS figure means that buyers get 100PS more than the base 458 model used to offer and torque is up by a staggering 160Ib ft. The urge now comes much lower in the rev range too; peak torque arrives at 3000rpm - which means you get it twice as quickly as you did in the old 458. That equates to 0-62mph in three seconds dead, with 124mph passing 5.3 seconds later. Top speed is over 205mph. To help those acceleration figures and give you a reason to rev the car to its 8000rpm peak, Ferrari caps the torque in the first six gears. Only in the seventh ratio of the updated dual clutch automated manual gearbox can you access all 560Ib ft of torque. So straight line performance is faintly ridiculous - and handling should be improved too, thanks to a suspension system that uses lessons learnt in the hardcore 458 Speciale model and adds a sprinkle of extra technology. That torque cap means traction is astonishingly good, even without the 4WD you'd get in a rival Lamborghini Huracan or Audi R8 V10 Plus. A second generation 'Side Slip Control' also flatters even the most ham fisted of drivers, allowing them to perform smokey drifts without fear of falling off the race track. Downforce is up too, helping the 488 GTB lap Ferrari's famous Fiorano test track two whole seconds faster than the 458. Overall then, we think it's fair to say that the purists needn't have worried. 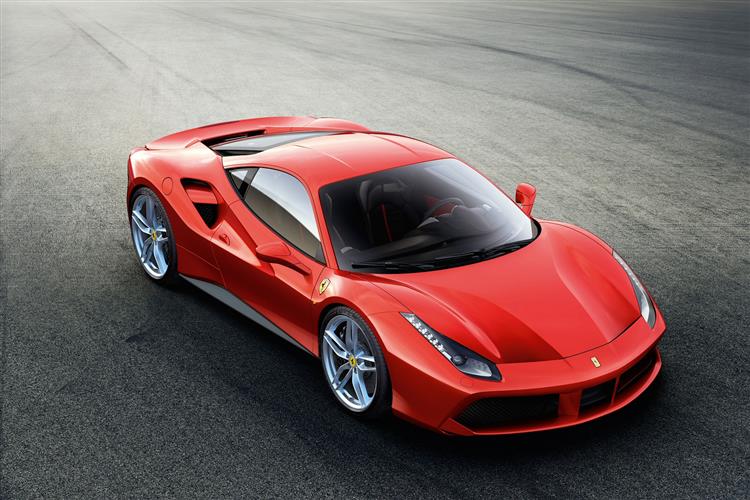