A4 EFFORT (some text hidden)

Audi's A4 has sharpened up its act a little in the face of tough competition from BMW's 3 Series, Mercedes' C-Class and the Jaguar XE in the image-conscious compact executive sector. Jonathan Crouch takes a look.

This fifth generation Audi A4 now features a sharper look and continues to claim to be class-leading in nearly all the areas that really matter to business buyers in the compact executive segment. That means efficiency, cabin quality, practicality and technology. As a result, it'll be hard to ignore if you're looking for a car of this kind.

Audi knows a thing or two about mid-sized family cars with a prestigious feel, compact executive contenders like this A4. This model, along with BMW's 3 Series, has driven huge growth in that compact executive segment, vanquishing Mercedes' C-Class in the process. Today though, things are different. The C-Class has been rejuvenated into a much stronger proposition, the 3 Series range has been rejuvenated and very accomplished class rivals have arrived in the form of Jaguar's XE and Alfa Romeo's Giulia. This improved version of the MK5 model A4 is Audi's response. What we have here is a car that's sleeker and cleverer than it's ever been - and it makes increasing use of the brand's sophisticated mild hybrid engine technology. As a result, this Audi is inevitably more efficient too, with tax-beating CO2 WLTP-rated figures now promised on the most frugal diesel models. Inside, we're promised the classiest cabin in the segment - and one of the most technologically advanced. Plus, as usual, there's the option of quattro 4WD and either saloon or Avant estate bodystyles.

Audi is gradually introducing its mild hybrid 48-volt technology across the four and six cylinder petrol and diesel engines in the A4 line-up. Their power outputs range from 150PS to 347PS - from the Audi A4 35 TFSI up to the Audi S4 TDI, that S4 now featuring diesel power for the first time. Audi obviously sees more of a future for diesel than some of its rivals; the brand is introducing two more affordable TDI units to the line-up, the 30 TDI with 136PS and the 35 TDI with 163PS. As before, the A4 differs from its BMW 3 Series rival in its use of front wheel drive for most models. Also as before though, quattro 4WD is optional - and standard on the top V6 variants. The A4 has always struck an appealing balance between handling and comfort and with this MK5 model, the Ingolstadt engineers sought to improve its credentials still further by developing a sophisticated five-link suspension system. Optional adjustable shock absorbers with 'sports' and 'comfort' modes will enable owners to get the most from this and a dynamic steering system is another extra cost feature that'll reward those who like their driving. Both features can be controlled through the standard Audi drive select driving-dynamics system, which alters throttle response and auto gearshift timings in its most basic form. Talking of auto gearshifts, most variants standardise the seven speed dual clutch 'S tronic' unit that claims to be able to improve both performance and fuel consumption. 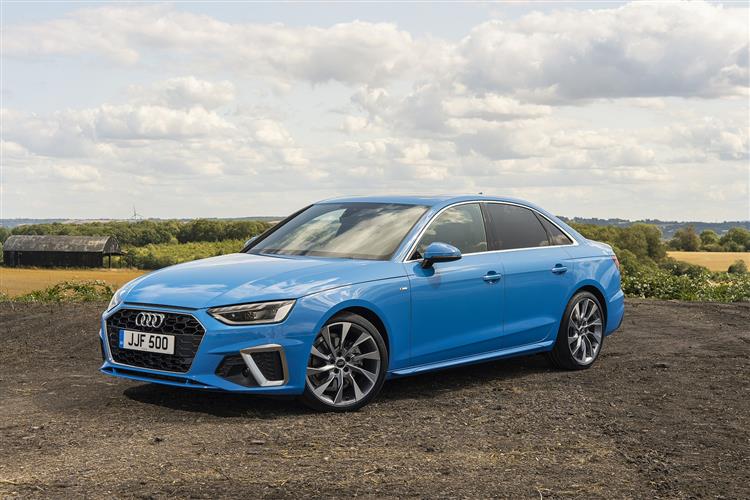