DIESEL DO (some text hidden)

Ford's third-generation C-MAX is at its best with the brilliant 1.5 turbodiesel engine. Jonathan Crouch reports.

So you've decided on a Ford C-MAX compact MPV? It's a good choice - give yourself a pat on the back. Next you have to decide which engine and that choice isn't particularly tricky either. Go for the 1.5-litre TDCi diesel. With that combination, you have just about the most multi-talented five-seater anywhere on the market.

Sometimes it really doesn't pay to overthink things. It would be easy to get tied up in knots figuring out exactly what a five-seater Ford C-MAX really brings to the party over a five-seater Ford Focus, weighing that against efficiency and handling penalties and so on and so forth. True, buying a car is a significant investment that shouldn't be the work of a moment, but can we save you a lot of stress? Both the Focus and the C-MAX are brilliant. You can't lose whichever you pick and now that the C-MAX has been fitted with a 1.5-litre TDCi turbodiesel engine, you're getting a car that fulfils the family duties but which is perky enough to have you looking for the long route home from the school run. Ford first introduced the C-MAX in 2003 and since then has sold more than 1.2 million in Europe and currently holds a 12% market share. This heavily revised third-generation model looks to make further inroads into the shares of rivals like the Citroen C4 Picasso, the Renault Scenic and the Peugeot 5008.

Ford expects this 120PS 1.5-litre TDCi engine to make up the lion's share of UK sales and it's not hard to see why. We're glad Ford has seen fit to plumb it into the pointy end of a C-MAX. Thus endowed, the car will get to 62mph in 11.3 seconds which sounds a fair bit slower than the car feels, as there's a hefty surge of torque (some 270Nm) chiming in at just 1,750rpm. In that regard, the engine feels a little bit old school in that the throttle response feels very turbocharged, but it's certainly not old hat in terms of refinement. The C-MAX was always an easy pick for anyone who enjoyed driving. It was by far the best car in its class when showed a B-road. Now that the Golf SV is around, that superiority is no longer quite so cut and dried, but it's still a class act. Particular attention this time round has been paid to improving refinement. Noise, vibration and harshness have been improved through the use of thicker side glass and more absorbent seals around the tailgate and rear view mirror. The engine bay heat shield has been filled with acoustic damping material to reduce powertrain noise and diesel cars are equipped with extra acoustic seals to further reduce noise intrusion. A retuned dual mass flywheel helps to reduce shaking forces when the engine is under load, while revised engine mounts offer improved refinement during Auto-Start-Stop operation. 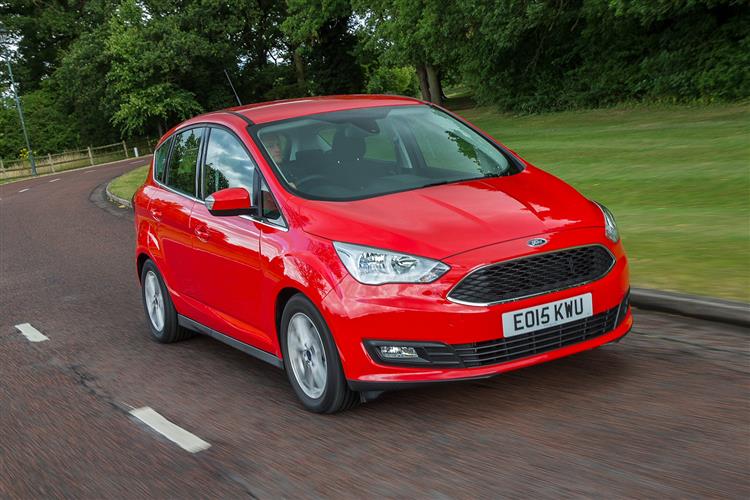