Most Ford Mondeo buyers choose the 2.0L 150PS diesel variant, which now gets the brand's more advanced EcoBlue technology. This model might not promise fireworks, but it's easy to appreciate the brilliance in its delivery. Jonathan Crouch reports.

The improved Ford Mondeo is a good all-rounder in 2.0-litre EcoBlue 150PS guise. This one gets to 62mph in 9.3 seconds yet will return almost 60mpg on the combined cycle. Pricing has been kept reasonable and equipment levels are strong enough to give the premium marques something to seriously worry about.

Here's a car that deserves better, Ford's Mondeo. In every generation we've seen, it's been markedly improved, yet its maker's efforts have been rewarded with sales that have progressively diminished over the decades as the traditional medium range family segment this car champions has been plundered by trendy small SUVs and plush German compact saloons. This is an improved version of the fourth generation version and in many ways, it's the best Mondeo yet. The 2.0L EcoBlue diesel 150PS variant we're looking at here is easily the best-selling derivative in the range and has recently been updated with some of Ford's latest diesel technology. And, in both hatch and estate guises, it comes fully-equipped to take on tough segment rivals like Volkswagen's Passat and Vauxhall's Insignia. Sounds promising. Let's put this Ford to the test.

The sum total of 150PS might not sound very much when you're looking at a vehicle as big as the latest Mondeo, but cool your jets a minute. This is a diesel engine we're talking about, so the peak power output is actually not really as relevant as the torque it makes. Developing a rippling 370Nm of torque at just 2,000rpm, this engine has more than enough to give the Mondeo a respectable turn of pace. It'll get to 62mph in 9.7 seconds and run onto a top speed of 133mph but even those numbers give little clue as to its midrange strength and flexibility. The engine features Ford's lean NOX trap exhaust after-treatment system for even cleaner emissions. Want more? Ford's delivering. This 190PS version of this unit (which has to be had with the new 8-speed auto gearbox) can also be had with Intelligent All-Wheel Drive, which offers a seamless transition between front-wheel drive and all-wheel-drive performance to automatically enhance traction and road-holding when needed. The Mondeo was the first model for Europe to be built on Ford's global CD-segment platform, which debuted the company's integral link rear suspension. This stiff platform and body structure combination helpds the car deliver handling that's difficult to better in this class. Driver's also get steering with variable weighting to match the "comfort," "normal" and "sport" chassis settings of Ford's Continuous Control Damping. 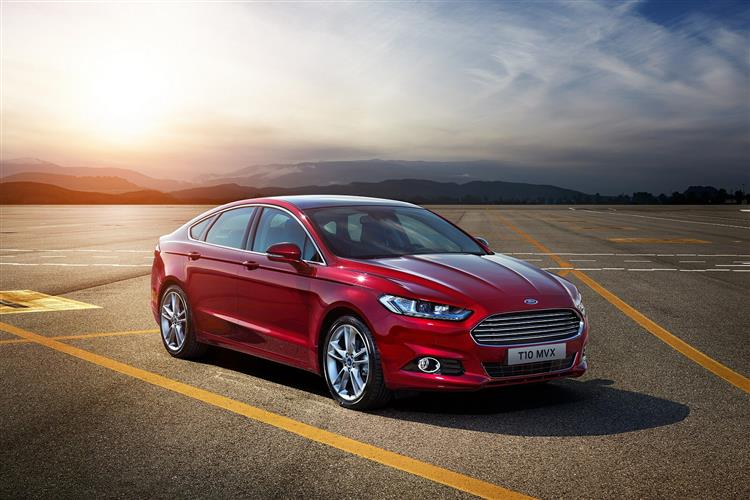