By now you should know what to expect from a 2.0-litre Audi TT but this third generation model still has a few surprises up it sleeve. Jonathan Crouch looks at the entry-level 40 TFSI variant

You may think you know the Audi TT - but perhaps you don't. The Ingolstadt brand has refettled its little sportscar in recent times, with key upgrades - especially beneath the bonnet. Plus there's a fresh badging structure that sees the entry-level version re-branded the '40 TFSI' while swaping out its old 1.8-litre petrol engine for a 2.0 TFSI unit with 197PS. As usual, there's a choice of Coupe or Roadster bodystyles.

Old motoring prejudices can take a long time to overcome. Take the Audi TT as an example. When it was first launched back in 1998, it was criticised for being a touch dull to drive. Actually, the package on offer was pretty well pitched for the needs of most likely buyers - and Ingolstadt gradually fettled it further over the years. The second generation model was under-rated too, as has been this MK3 version. In response, this German brand has updated the range and added in extra equipment and a new 2.0-litre engine at the foot of the line-up to replace the previous 1.8-litre TFSI powerplant. There's a new badging structure too, which kicks off with the '40 TFSI' variant we're going to look at here. It uses the 2.0-litre petrol engine that the range hinges around. Does it offer anything for keen drivers?

Where there used to be a single 2.0 TFSI engine available to TT buyers, now there are two - an entry-level unit developing 197PS (badged '40 TFSI') and a version of the previous 2.0-litre engine which now gets a boost to 245PS (and new '45 TFSI' badging). There's now no longer a diesel option. The sporty TTS variant isn't our focus here, but we'll tell you that it retains its existing badging but gets a slight reduction in power (306PS, down from 310PS) but a little extra torque to compensate, so the rest to 62mph sprint figure (4.5s) is actually fractionally improved. In conjunction with the 197PS 2.0 TFSI engine, customers have the choice of a six-speed manual gearbox or a seven-speed S tronic dual-clutch auto transmission. The 245PS unit is available with either the manual gearbox and front-wheel-drive - or with S tronic auto transmission and the multi-plate clutch-based quattro permanent all-wheel drive system. Both versions of the TTS feature quattro as standard. In both transmission types, the close-ratio lower gears enable powerful acceleration, while the wide ratio of each transmission's highest gear reduces the engine speed and with it fuel consumption. By networking quattro drive with the standard 'drive select' driving mode system, the TT driver can adjust the operating parameters of the all-wheel-drive system to suit his or her individual requirements. In "auto" mode, optimum traction and balanced driving dynamics are given priority. In "dynamic" mode, torque is distributed to the rear axle earlier and to a higher degree. In the drive select "efficiency" mode, the set-up can temporarily shut down the quattro system if conditions suit this. Audi's magnetic ride adaptive damper control system is fitted as standard to the TTS and is optional for all other versions. 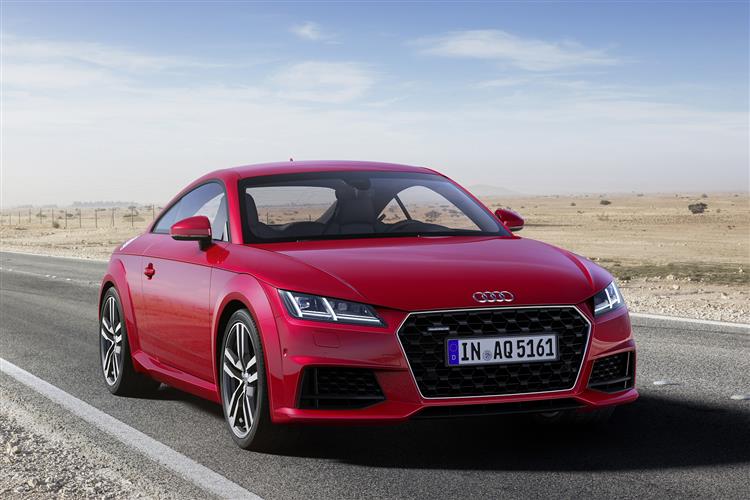