The Audi TT Roadster offers a slick package in this improved third generation guise, aiming to build on the best bits of the first two models. Jonathan Crouch reports

This improved third-generation Audi TT Roadster continues to play it safe on the styling front but packs in some interesting equipment, is built from all the right stuff, undercuts its German rivals on price and gets some great efficiency numbers. Buyers get the options of front or quattro all-wheel drive, with potent TT S and TT RS mdels at the top of the range.

The Audi TT will always be remembered as a coupe. That's an inescapable fact. Despite this, the contribution of the Roadster model to overall sales shouldn't be overlooked, the open car accounting for around 25 per cent of all registrations. Since it first appeared in 1998, the TT Roadster has been a consistent thorn in the side of first the BMW Z3, then the Z4 and all generations of the Mercedes SLK. It's been available in front or four wheel-drive, with power outputs from a modest 150PS right up to the barnstorming 340PS TT RS model. In other words, it's had a very wide brief to fulfil. That's hasn't changed with this third generation model, here lightly revised. If the first generation car brought us some extreme styling and the second gen model improved the driving dynamics, this third stab at the formula has done well in taking the best of both prior cars while developing superior safety, refinement and efficiency.

The TT Roadster features an electrically actuated fabric top. This roof features excellent acoustic and thermal insulation, with particular attention paid to the frequencies generated by the passing airflow. A thick fleece layer on the black inner headlining helps reduce the noise level in the interior by up to 6 dB compared with the previous generation TT Roadster. Audi's tinkered a little with the engine line-up in this revised MK3 model TT Roadster. The engines and transmissions on offer mirror those of the coupe model, which means that the old entry-level petrol unit, a 180PS 1.8-litre TFSI powerplant, has now been replaced by a 2.0-litre TFSI powertrain with 197PS (badged '40 TFSI'), while the previous 230PS 2.0 TFSI engine gets a boost to 245PS (and new '45 TFSI' badging). There's now no longer a diesel option. The TTS retains its existing badging but gets a slight reduction in power (306PS, down from 310PS) but a little extra torque to compensate, so the rest to 62mph sprint figure (4.5s) is actually fractionally improved. The flagship model remains the 400PS 2.5-litre five cylinder TT RS, which only comes with S tronic auto transmission and can get to 62mph in 3.7s. In conjunction with the 197PS 2.0 TFSI engine, customers have the choice of a six-speed manual gearbox or a seven-speed S tronic dual-clutch auto transmission. The 245PS unit is available with either the manual gearbox and front-wheel-drive - or with S tronic auto transmission and the multi-plate clutch-based quattro permanent all-wheel drive system. Both versions of the TTS feature quattro as standard. In both transmission types, the close-ratio lower gears enable powerful acceleration, while the wide ratio of each transmission's highest gear reduces the engine speed and with it fuel consumption. 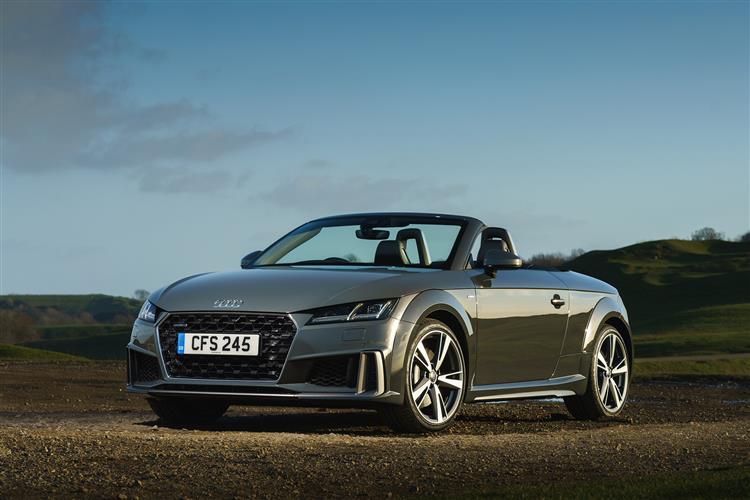