WARMING TO THE THEME (some text hidden)

Want something that's a bit more mature than the usual hot hatch brigade but which can still show you a good time on the right road? Look no further than Peugeot's improved 308 GT in that instance. Available in hatch or estate, with a 180PS diesel or a 205PS petrol engine, it's direct but discreet.

Warm hatches. They don't really tend to get the blood racing do they? Usually bought by customers who wanted the range-topping hot versions but couldn't justify the expense to their other halves, the warm versions have a faded wash of penultimate about them. Peugeot, however, doesn't think that should be the case and in the shape of its improved 308 GT, it brings us a car with a personality of its own. True, this variant doesn't have the 270bhp firepower of the range-topping 308 GTi derivative but then it doesn't have that model's higher running costs and off-putting insurance costs either. As a result, this 308 GT variant should continue to command a profitable niche for itself. In the panoply of warm hatches, this one's a bit special.

There are two variants of the 308 GT to consider. Should you prefer a car that drinks from the black pump, there's the 2.0-litre diesel model. This packs 180PS at 3,750rpm and offers maximum torque of 400Nm at 2,000rpm. It's mated to a new eight-speed automatic gearbox. Go petrol and you're looking at a four-cylinder 1.6-litre THP 205 Stop&Start petrol engine. You stir the stick yourself here, with a six-speed manual gearbox to make the most of its 285Nm of torque, available between 1,750 and 4,500rpm. The 308 GT's suspension set-up features pseudo MacPherson at the front, and a torsion beam rear, stiffened by between 10 and 20 per cent depending on model. Passive dampers are fitted with hydraulic bump stops for reduced noise. The steering is a variable electric setup and the rubberwear comes courtesy of Michelin and its excellent Pilot Sport 3s. The brakes are big 330mm discs up front, gripped by floating calipers. At the rear, the discs are 268mm diameter on 308 GT and 290mm on the alternative 308 GT SW estate bodyshape. Both engine types have a switchable ESP stability control system as standard. 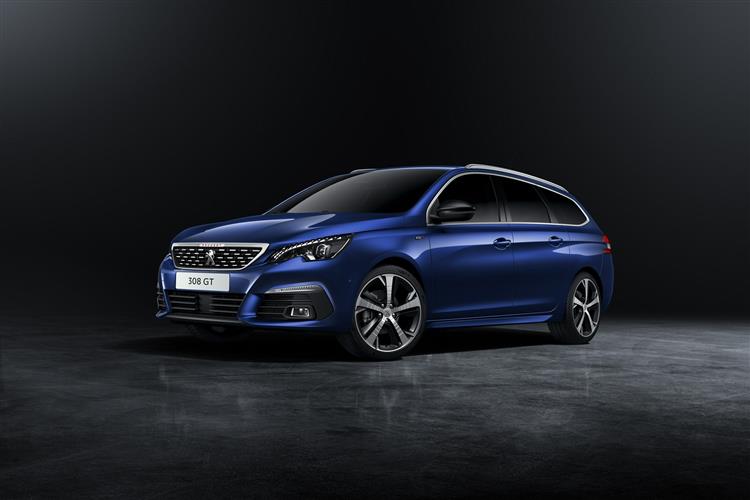