Nissan's improved X-TRAIL is bigger and better than ever and the 1.7-litre dCi diesel engine is the popular pick. Jonathan Crouch takes a look.

If you were considering a seven-seat family SUV, Nissan's latest X-Trail is a very smart pick. It gets a high quality interior, superior levels of safety and a dizzying amount of technology on board. It's available with 1.3-litre petrol power but most buyers choose the volume 1.7-litre dCi diesel engine we're looking at here. With this variant, you get the choice of front or four-wheel drive.

You can't fault Nissan for perseverance. It tried with two generations of X-Trail to convince the British public that here was a viable budget alternative to the Land Rover Freelander. It was something that had a bit of ruggedness about it, yet would still seat five people and very good it was too, but it seemed people either wanted a Freelander or they desired something a bit softer-edged. Something like a Nissan Qashqai, come to think of it. With that in mind, Nissan went back to the drawing board, ditched its Qashqai+2 model and firmly nailed its colours to the mast of the third generation seven-seat X-Trail model launched in 2014 but reviewed here in the updated form introduced in the Spring of 2019. Fitted with a small 1.7-litre diesel engine, the X-Trail makes an interesting and affordable alternative to both SUVs and MPVs. Nissan could be on to something here.

Although the X-Trail appears to have become a bit more lifestyle oriented in recent years, this is Nissan we're talking of here; manufacturers of some of the cleverest all-wheel drive systems around. They just can't help themselves. Yes, you can buy a front-wheel drive X-Trail and it probably makes sense for quite a few buyers, but the four wheel drive chassis is extremely clever. The electronic four-wheel drive system, ALL MODE 4x4i, is controlled via a rotary switch on the centre console, it offers a choice between two-wheel drive, Auto mode or Lock offering permanent four-wheel drive. So far, so conventional. The X-Trail also features Active Ride Control and Active Engine Brake. Active Ride Control monitors the road surface to detect undulations which could potentially upset the pitch of the car body and alters the damping to compensate. Then there's Active Trace Control. By using on board sensors to monitor speed, steering angle, throttle opening and braking effort, Active Trace Control brakes wheels individually, as required, to reduce understeer and help the driver steer a safer path through bends: it is particularly effective on slippery, wet roads. Finally the X-Trail benefits from Uphill Start Support and Advance Hill Descent Control. Control weights are light but consistent and the 150PS diesel engine features 340Nm of torque so it's not as weedy as its modest capacity might at first suggest. The manual 2WD car will get to 62mph in 10.7 seconds and run on to a top speed of 121mph; with the diesel, you can only have manual transmission. 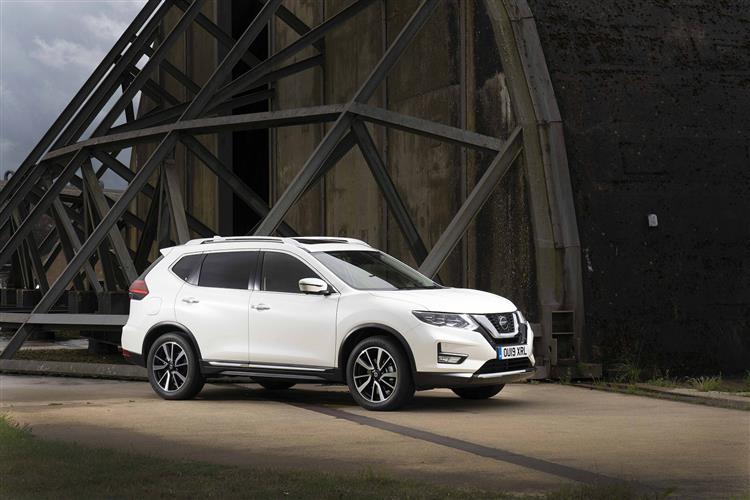