BMW coupes used to be all about compactness, lightness and rapid responses. It's good to know that there's still one that answers the call. This 2 Series might just be the most enjoyable car that the Munich manufacturer builds and it represents a brilliant new take on an old-school theme. Let's check out the variant that perhaps best combines enjoyment and sense, the 190bhp 220d diesel.

When it was first rumoured that the old 1 Series Coupe was going to be replaced by by a 2 Series model in the BMW line up, most of us thought that it would be a simple rebadging job, a facelift at most. You know the drill; new headlights, grille and tail lights, a few different choices of alloy wheels and a paint colours and that would be about the size of it. It was only when we saw the first spy photos of this car being hammered around the Nurburgring that we realised that it was something quite different to the gawky 1 Series coupe. It was longer and lower, with a sleeker roofline. In other words, things were about to get interesting. And so it's proved. BMW kicked the 2 Series range off with a bang, introducing a wide range of models, and it's found instant favour with those who hankered after a lighter, less complex Ultimate Driving Machine. Let's try the volume 220d variant to see whether all those plaudits are justified.

There are certain cars that just feel right within the first fifty metres and this BMW 2 Series is one of them. It's the sum of a bunch of small cues that just hit the right notes; seating position, control weights, engine tractability, suspension refinement, basic ergonomics, that sort of thing. It's much like the thing you've heard about interviewers often making a decision before you've even got into your seat. First impressions are crucial and this 2 Series nails them. When it comes to diesel options for this car, BMW will sell you a 218d, a 220d or a 225d but they've all got much the same 2.0-litre turbodiesel under the bonnet, just in different states of tune. Respectively you get 150, 190 and 224bhp from them. There's about £4,000 difference in price between the 150 and 224bhp variant but I have to wonder whether a clever chap with a laptop wouldn't be able to turn a 150bhp model into something far more potent in the space of a few minutes. What price your warranty though? The 190bhp 220d version gets to 62mph in just 7.1s and runs on to 143mph. Do you really need to go much faster than that? If the answer is yes, then there's the auto-only 225d variant that improves those stats to 6.3s and 150mph. 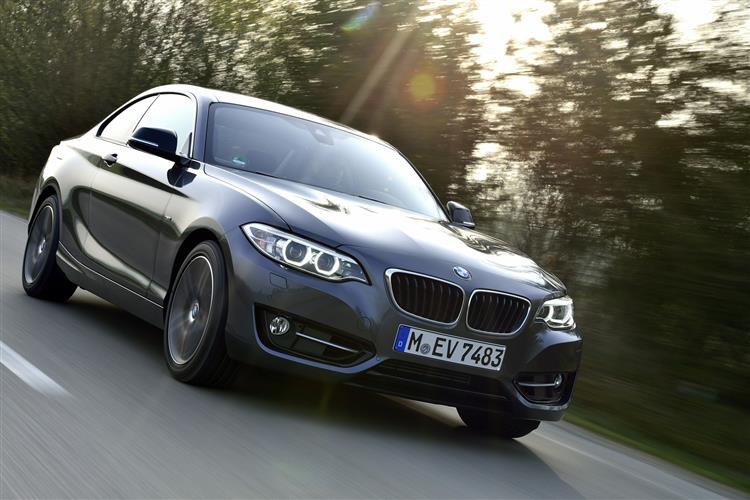