NOT SO MANY DUCATS (some text hidden)

Fiat's latest Ducato looks set to muscle in on the usual LCV suspects thanks to the addition of more frugal Euro6 engines. Jonathan Crouch reports

Fiat's Ducato might not be the first name on your LCV shortlist, but the latest Euro6-engined model definitely merits your attention. Spun off the same platform as the Peugeot Boxer and the Citroen Relay, the Ducato scores in three key areas; robustness, low running costs and increased cabin sophistication.

It's interesting how cultural factors creep into what seem the most pragmatic buying decisions. Take large panel vans as an example. On the face of it, choosing a van is about the least emotional vehicle selection procedure you can imagine. You weigh up the relative merits of each model and one comes out a winner. Yet how is it that in northern Europe, a Ford Transit is so often the result of that process whereas in southern Europe, those cold hard calculations usually equal Fiat Ducato? Clearly dealer proliferation is a factor, but more than that it's trustworthiness. If everybody else buys one, they must be good, right? The Ducato is good. Now in its sixth generation, the Ducato has forged a solid track record. It's notched up 2.6 million sales since it was first launched in 1981, and continues to make big numbers not only in Europe but also in the 80 international regions in which it is on sale. This model nw makes more running cost sense thanks to the addition of cleaner Euro6 engines.

Fiat has established itself as a centre of excellence for diesel engine technology and the Euro6 MultiJet II engines found under the bonnets of the Ducato reinforce that reputation. Most Ducato buyers opt for the entry-level unit, now a 2.0-litre 115bhp Multijet unit that's downsized from its predecessor Euro5 powerplant. Similarly, the flagship engine, previously 3.0-litres in size, is now a 2.3-litre MultiJet II unit, though it still develops 180bhp, the same as before. The core 2.3-litre MultiJet 130 and 150bhp engines continue on from before but get upgraded LPEGR technology to improve their efficiency. As before, all the engines are mated to six-speed, all-synchromesh manual gearboxes and there's also the option of a ComfortMatic transmission. The braking system benefits from effective discs which are ventilated 280mm or 300mm rotors, depending on gross vehicle weight. In recent times, Fiat has added in tougher brake pads and a more powerful brake servo too, along with a redesigned brake pedal that allows for smoother modulation of braking pressures while reducing pedal effort by up to 45 per cent. Mechanically, the Ducato retains its front-wheel drive configuration with a McPherson front suspension and a rigid-axle rear suspension with leaf springs. The front suspension top mounts have been reinforced to reduce noise, with a number of rear suspension configurations on offer depending on vehicle use. Single-leaf springs, with or without anti-roll bars, underpin standard van and passenger versions. Double-leaf springs, again with or without anti-roll bars, cater to large-capacity vans and heavy conversions. A heavy-duty rear suspension with double leaf-springs and an anti-roll bar is available for very heavy conversions up to maximum 2,500kg allowed. 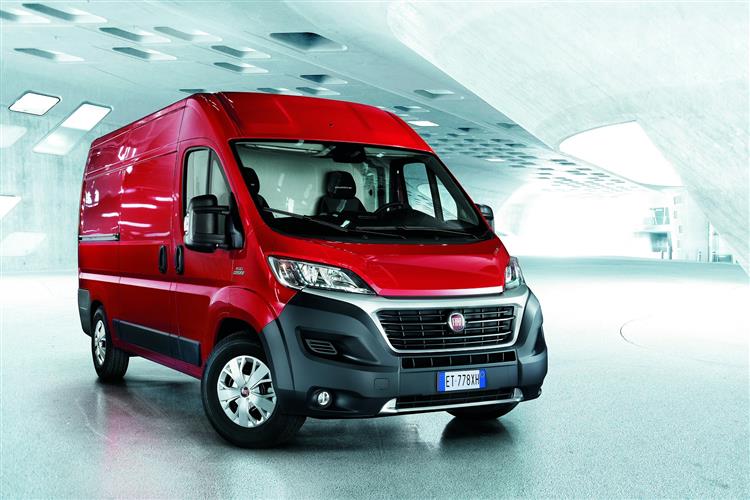