The Mercedes-Benz SL is at its most accessible in SL400 V6 guise. Jonathan Crouch checks it out.

The Mercedes-Benz SL is a car that has been around for a long time across its various generations. It's a vehicle that has layers upon layers of history and it's most accessible in this entry-level SL400 guise where you get a 3.0-litre V6 engine that's now been uprated to put out 367bhp and a more sophisticated 9-speed auto gearbox mated with it. A 'DYNAMIC SELECT' driving system with five transmission modes and Active Body Control with a neat curve tilting function both claim to take this legendary sportscar to a new dynamic level and the vario-roof can now be operated at up to 25mph. Sounds pomising doesn't it? Will SL-watchers need to earmark this one for future greatness?

Power comes courtesy of a twin-turbo 3.0-litre V6, the days of the badge on the back of a Mercedes giving a reliable clue to its engine displacement having long since passed. Still, as Lewis Hamilton and Nico Rosberg would doubtless attest, Mercedes clearly knows a thing or two about turbocharged V6 powerplants. While this one's uprated 367bhp power output wouldn't line it up on the front row of an F1 grid, it's more than enough to let the relatively lightweight SL get a wiggle on, clocking the 62mph sprint in just 4.9 seconds, while the electronically limited top speed of 155mph is shared with even more powerful versions. There's 500Nm of torque too, 20Nm more than before, and you access it through a freshly-developed 9-speed 9G-TRONIC auto gearbox. Across the range, SL drivers benefit from 'Dynamic Select' adjustable damping, a set-up you can tweak via 'Eco', 'Comfort', 'Sport', 'Sport Plus' and 'Individual' modes to suit the mood you're in and the road you're on. Another option is 'Active Body Control' with a curve tilting function. This reduces body movement through the bends in a way that's almost eerie. These changes do much to make the SL a more involving driver's proposition. Dynamically, this car has always sat rather uneasily somewhere between a Porsche 911 Cabriolet and a BMW 6 Series, not as sharp as the 911, not as luxurious as the Six. With this improved sixth generation SL, the difference is fundamental. In this, we've a car arguably able to offer much of the best of both worlds. 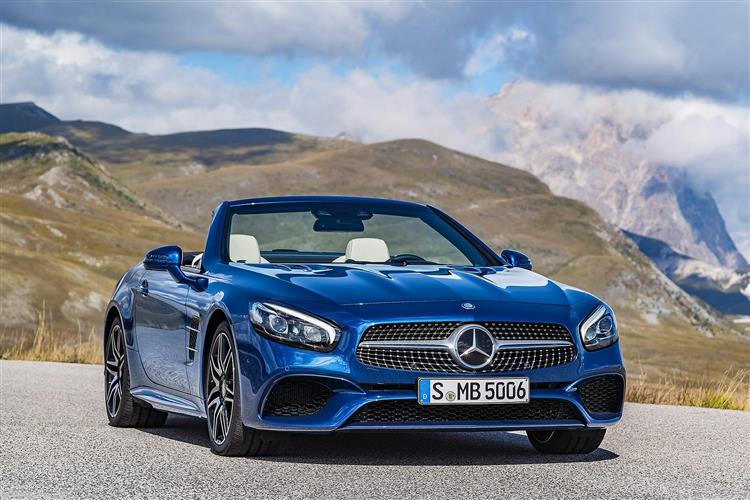