IDEAS ABOVE ITS STATION? (some text hidden)

The improved Peugeot 308 SW is that rarity; a compact estate car that not only looks good but is practical too. There's no seven seat option but this model comes with a classy interior, a state-of-the-art chassis and, thanks to some fresh powertrains, some excellent efficiency numbers.

I've always struggled a little with the concept of a 'small estate car'. After all, most people buy an estate in search of space and versatility, both tough briefs to meet if the model in question is in any way compact. Though not in this case. Not with this car - the improved version of Peugeot's second generation 308 SW. Here's proof positive that it isn't how big your car is that matters. It's how cleverly it's been designed for interior use of the space that it has. Let me show you what I mean. This 308 SW measures in at just under 4.6m but offers up to 1660-litres of space. The brand's larger 508 SW, in contrast, measuring in at around 4.8m, has 1598-litres inside. You can see the point. Let's check out the improved version of this model.

The 308 SW rides on the same chassis as the hatch and is all about refinement and a relaxed gait. The suspension carries no great surprises, with a standard front strut and rear torsion beam arrangement. Peugeot has fitted rear trailing arms that allow greater longitudinal arc in the wheel travel. It sounds esoteric but it makes for a smoother ride when the rear wheels hit ridges or bumps. The electrically-assisted power steering is geared towards ease of use rather than detailed feedback but perhaps that's just as well. It makes the 308 SW very comfortable around town in the sort of usage it will mostly see. Onto engines. It's nice to report that the changes made to this revised 308 SW are more than skin-deep. There's an all-new 1.5-litre BlueHDi 130 desel engine for example. And if you're able to stretch up to the 2.0-litre BlueHDi 180 diesel powerplant at the top of the range, you'll now find it mated to an all-new 8-speed automatic transmission. The brand says that its 1.2-litre three cylinder PureTech petrol engine has been extensively revised too, in pursuit of extra efficiency. Otherwise, it's as you were. Most will want the 1.6-litre BlueHDi unit, which comes in either 100 or 120bhp guises. There's also a 2.0-litre BlueHDi engine, offered with either 150 or 180bhp. For petrol people, the engine line-up opens with an 82bhp, 1.2-litre three-cylinder PureTech unit, then there's a choice of either 110 or 130bhp versions of this same engine further up the range. Across the line-up, transmissions are fairly standard fare, with five and six-speed manuals or a six-speed torque-converter automatic. If you want something sparkier, there's a warmed-up GT model. 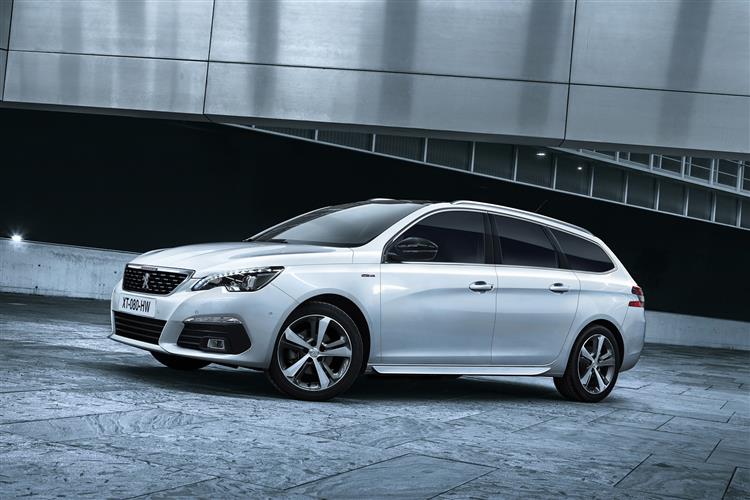