The 308 1.6 BlueHDi 100 is a diesel family hatch that offers a winning combination of qualities. A crisp driving experience, fuel consumption of 78.5mpg, emissions of just 94g/km and an interior that's beautifully finished all look tempting. Plus his revsed version features smarter packaging and a bit more useful technology. The result is a more desirable product than you might expect from this familiar Gallic brand. You might be surprised at how much you'd like it.

There may be some that disagree, but until the arrival of this second generation 308, I don't think Peugeot had ever built a truly competitive car in the family hatch class. The 306 drove brilliantly but its interior was about as sophisticated as a Jimmy 'Five Bellies' after dinner speech. The less said about the 307 the better, while the earlier MK1-era 308 models started modestly and improved, though were never really anywhere close to the talents of the Volkswagen Golf and the Ford Focus. At one point in the late Noughties, it seemed that bridging this gulf in class was beyond Peugeot, but things took a turn for the better when this MK2 308 model was first launced in 2014 and have improved still further with the introduction of the current facelifted version of that design, introduced in mid-2017. Here, we're looking at this car in eco-friendly 1.6 BlueHDi 100 guise and in this form, it aims to be able to put a lick on the cars that once kicked sand in its face.

Although the electrically-assisted steering and supple suspension at first lull you into thinking the 308 is a bit of a confection from the sweet trolley, drive the car a bit harder and it really ups its game. That ability to mirror your mood is a rare quality in mainstream cars which are often a little two dimensional. The Golf has it and so does the Focus. The Megane? Debatable. The 308 is part of an exclusive club. Mind you, this has never really been a car for the hard charger. Instead, it's a family hatchback that's more about refinement and a relaxed gait. The suspension carries no great surprises, with a standard front strut and rear torsion beam arrangement. Peugeot has fitted rear trailing arms that allow greater longitudinal arc in the wheel travel. It sounds esoteric but it makes for a smoother ride when the rear wheels hit ridges or bumps. The electrically-assisted power steering is geared towards ease of use rather than detailed feedback but perhaps that's just as well. It makes the 308 very comfortable around town in the sort of usage it will mostly see. The six-speed manual gearbox is a pleasant system and provides some welcome old-school interaction with an otherwise high-tech car. 62mph from rest takes 11.3 en route to 116mph. 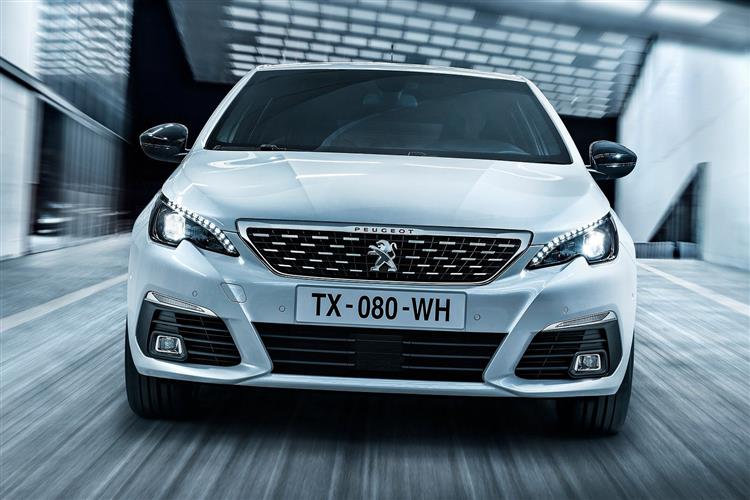