TO BOLDLY GO (some text hidden)

Although it could be accused of being all show and no go, the front-wheel drive Fiat Panda City Cross is too likeable to damn with such a verdict. In fact, it emerges as something surprisingly appealing. Especially in this new mild hybrid form.

The Fiat Panda 4x4 you've probably heard of. It's a bit of a minor cult car. The Fiat Panda City Cross? This one's a bit more of an unknown quantity, but stick with us because it's a good 'un. The elephant in the room first. Despite looking ostensibly similar to the Panda 4x4, the City Cross only directs drive to its front wheels. That might well be enough to deter a few people who will immediately label it inauthentic, but those of you with less dogmatic standpoints might like to give it a chance. It almost seems a model out of time. A few years ago there was a big boom in this sort of car. We had the Rover Streetwise, the Volkswagen Polo Dune and the Citroen C3 XTR to name but a few. These have all proved to be an evolutionary dead end for their manufacturers yet if anyone could be relied on to make the genre work, it's Fiat. With good reason too.

The Panda 4x4 looks of this City Cross model suggest that light off road prowess is possible. A glance at the still-restricted ride height though, confirms that this is very definitely not the case. Still, if looks are everything, then this variant will certainly stand out on the school run. Unlike the 85hp two cylinder TwinAir engine used by the Panda 4x4, this Cross model uses a mild hybrid 70hp 1.0-litre three cylinder petrol engine, this unit replacing the aging 69hp 1.2-litre conventional four cylinder powerplant that this Panda Cross has been soldiering on with since launch. The mild hybrid powerplant improves fuel efficiency without impeding performance. It also ensures a very high standard of driving comfort thanks to a 12-volt 'BSG' 'Belt-integrated Starter Generator', allowing for a quiet, vibration-free restart of the internal combustion engine in Stop&Start mode. The engine (which in conventional form we've already seen in the 500X SUV) puts out 92Nm of pulling power and works via a 6-speed manual gearbox inegrated with that 'BSG' set-up we just mentioned. The 'BSG' system is mounted directly on the engine and is operated by the belt that also drives the auxiliaries. The new system also involves lowering the entire power unit 45mm so the car behaves better on the road thanks to the lower centre of gravity. Like any other Panda, this one's especially at home in a city environment. True, the five-speed gearbox could be a little more precise, but you'll appreciate the way this car takes even quite nasty small urban bumps in its stride. And delivers neat little touches like the steering's 'City' mode option to increase the assistance it gives at parking speeds so that you can use the tight 9.3m turning circle more easily. Urban-friendly through and through you see. 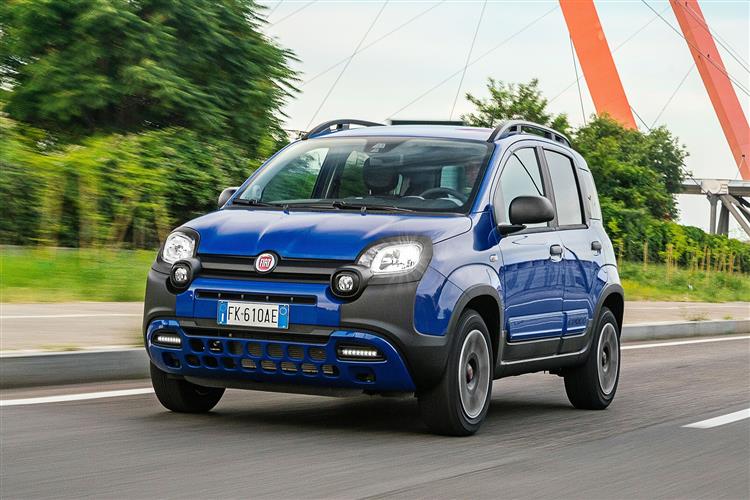