By 2014, Renault's third generation Megane was getting a little old, having been on sale since 2008. However, it still had two years to live, so the French brand gave the car one last update to last it through the final couple of years of its life in MK3 model guise. In this final form, this Gallic family hatchback was a smarter proposition - in more ways than one. If you're shopping for something Focus or Astra-shaped in the used car family hatchback segment, it probably won't be one of the first cars you'll immediately think of but it still offers a very complete all-round package that's difficult to ignore.

When the final version of the third generation Renault Megane reached the company's dealer showrooms early in 2014, it was in a period of turmoil for the French maker. The brand had gambled on a range of full-electric models and that outlay was taking a long while to pay off. Worse, the expenditure had forced the Gallic brand to compromise its development budget a little, hence the fact that the third generation Megane, first introduced in 2008, had still to represent the company in Europe's most important family hatchback buying segment. This model had already been heavily revised once, in 2012 when it got fresh engine choices and a range of styling tweaks. In this later version, the looks were further tweaked and specifications enhanced. The changes lasted the MK3 model through to the end of its life at the end of 2015.

What You Getword count: 928

The styling of the original 2008 version of this MK3 Megane wasn't especially memorable, but it was essentially quite smart, with a strong dynamic stance thanks to particularly short front and rear overhangs. So not too much of a nip and tuck was needed back in 2014 to bring it up to date. Here, we're looking mainly at the five-door hatchback and Sport Tourer estate models. By this time, the saloon model had been dropped from the range. The coupe and coupe-cabriolet variants we'll cover in separate reports. In terms of the hatch version most will be looking at, well we always quite liked the front end, with its racy crease lines sweeping down from the A-pillars across the sculpted bonnet and the neat way the wipers are concealed beneath the bonnet line. The changes made in 2014 gave this front section a more contemporary look, with a prominent bold Renault logo set against a gloss background and flanked by restyled streamlined elliptical headlamps and LED daytime running lights that stretch along the outer edges of the revised bumper, extending the fluid contours of the air intakes and adding to the purposeful look. Move along the side past the restyled alloy wheels and you might struggle to see the 'Latin influence' Renault reckoned was at work here but there's a strong coupe-like look and a feature line that at the rear is picked up by the two-piece light clusters. You're more likely though, to remember the cabin of this car, if only because of the rather odd digital speedometer/analogue rev counter instrument arrangement most models offered - though not the up-market sporty variants, which got a more conventional set of dials. There's no issue with the quality of fixtures and fittings that were decently screwed together by the Spanish Palencia factory: the soft-touch finish on the dashboard cowling for example that's resistant to daily use and the ageing effects of sunlight. And the well-chosen selection of trim and materials that's especially nice on plusher variants. The important thing to note is that you don't have to pay for an expensive version for your Megane to feel smartly turned out. And that's a major advantage this Renault has over competitors from Volkswagen and Ford. It's certainly very comfortable at the wheel, thanks to reach and rake adjustment for the steering wheel and a wider range of seat height adjustment than any other car in the class from this era can offer. Rear three-quarter visibility could be better though. Because this car was designed primarily for lefthand drive markets, the fusebox takes up half the glovebox space but otherwise, there's plenty of practicality around the cabin, with under-floor stowage compartments and door bins designed to carry a one-litre bottle. Dominating the upper middle part of the dash is the display screen for the Carminat Tom Tom sat nav system most new car owners wanted. With this revised model, they also had the option of building into it the brand's clever R-Link infotainment system with an upgraded 7-inch display that offered more sophisticated route guidance as well as an Eco Driving menu and various downloadable apps. We like the way this screen is so versatile, showing anything from uploadable family pictures to weather reports. And there are features like voice recognition, email access and text-to-speech functionality. Thanks to a long 2.64m wheelbase, interior space was always a selling point of this design, something you especially appreciate from a seat in the rear. Renault reckoned that three fully sized adults would be perfectly comfortable here - though we'd doubt that if the journey were to be very long. Still, no car in this class can properly accommodate three burly people at the back: should that be required, they'll be better off in this Megane than they would be in many other models in this segment. And three kids will be quite comfortable. Luggage is well-served too. Though it has quite a high lip, the 372-litre boot is one of the largest and best shaped in the class from this era, offering 56-litres more than you'd get in a comparable Focus and 21-litres more than you'd get in an Astra. If you get a car on which the original buyer didn't specify the preferable extra-cost spare wheel, there's 33-litres of under-floor storage too. Even with the spare fitted though, the cargo area is certainly able to swallow a couple of family suitcases and two overnight bags with ease - though folding the rear seats down to increase cargo capacity could be a simpler process. The reason for that though is that the seat folding process is a bit better thought out than with most cars in this segment. Normally, all that happens on a car like this is that you flop the rear seatback onto the base - but that doesn't leave you with a flat cargo bay. Here, you can pull up the seat base too and push it forward, so that the seatback can lie level. It makes a big difference - especially when you're trying to get in something big, square and heavy like a fridge or a chest of drawers. It also means that though the capacity revealed is one of the smaller totals in this class - 1,129-litres - you'd still be able to see this car as one of the more practical choices in its sector. If that's not enough, the Sports Tourer estate version offers 524-litres of space beneath the rear parcel shelf and the option of folding the back seats down to free up 1,600-litres. 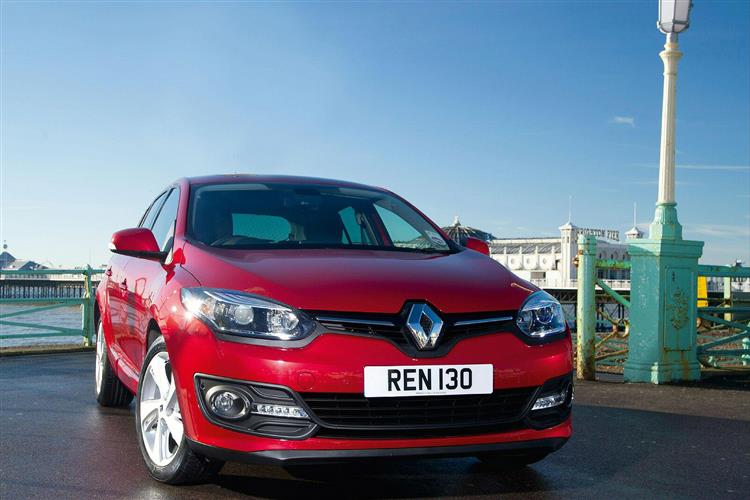