Chance upon press coverage of a Renault Megane these days and it'll probably be some fawning story on the Renaultsport coupe models. The rest of the Megane line up really doesn't get much of a look in. That's something of a shame because it's a car that has been assiduously fettled over the years and now scores an easy recommendation to family hatch buyers looking for something previously owned. Yes, that's right, a used car recommendation in this sector that's neither a Golf or a Focus. What's more, it's French. Here, we're talking of the third generation model, which received the first of its facelifts in 2012, though the car created was only sold until the range's second more far-reaching update in early 2014. The Megane models produced during this period are well worth seeking out though. Here's what to look for.

The end of 2012 was when Renault UK pressed the reset button. It fired a bunch of underperforming dealers and deleted the sporty Wind, the passenger Kangoo MPV, the Laguna mid-ranger and the Modus and Grand Modus supermini-MPV models: all bit the dust. Even Renault's iconic Espace wasn't spared the axe. The Megane looked vulnerable too, but it survived the cull, the French manufacturer having just announced an uprated and facelifted version of the car. The main headlines here included a revised front end with LED daytime running lights added and the addition of a frugal 1.2-litre TCe petrol engine to the line-up. Efficiency improved and the styling was tidied up. At the same time, Renault improved the materials quality of the cabin, which was a welcome upgrade. In summer 2013, Renault announced the Knight Edition, a fairly standard mid-life special edition which took the entry-level petrol and diesel engined models and adorned them with metallic paint, tidy alloy wheels, sports bumpers and a few other details. The asking price for this was £350 over the non-beknighted versions. Early in 2014, Renault was at it again, updating the look of the Megane to encompass a new corporate Renault family face.

What You Getword count: 342

With this 2012 to 2014-era third generation Megane, Renault took what was widely accepted as a handsome piece of automotive styling work and had a little tinker. The front end gained the ubiquitous LED daytime running lights, while the bumper received a gloss black finish with chrome highlights. The selection of wheels was also entirely revised. The cabin came with updated interior trims, including a two-tone leather pack available in a choice of two finishes. The GT-Line trims got specific 'boomerang'-shaped LED lights, visible red upholstery stitching and a sports steering wheel incorporating thumb rests, plus Renault Sport-badged door sill guards and dashboard trim strip. The colour palette was adjusted too, with the addition of Azzurro Blue and Arctic White. The Megane retained its coupe-like stance, thanks particularly to its short front and rear overhangs, a long 2.64m wheelbase, a steeply-raked roofline and a wide track. It certainly exuded a feeling of much higher quality than its predecessor, with thin cut lines between the different body panels. Great care went into the quality and fit and finish of the materials used and there were nice touches like the soft-touch finish on the dashboard cowling that claimed to be resistant to daily use and the ageing effects of sunlight. Another nice touch was the way that the windscreen wipers were aesthetically concealed beneath the bonnet line. Like the Scenic and Grand Scenic, the Megane could be ordered with the Visio System which comprised a camera fixed to the windscreen behind the rear view mirror. It automatically switches from main to dipped-beam headlights and also controls a Lane departure warning system. Comfort was further enhanced by a Hill Start Assist function, while 'Motorway Mode' indicators also debuted. To assist parking manoeuvres, a camera located at the rear provided a precise image of the vehicle's immediate surroundings and depicted its trajectory to help drivers adjust their line. Last but not least, the dual-zone automatic climate control was equipped with a quality sensor which monitored cabin air quality and automatically activated the air-recycling mode whenever necessary. 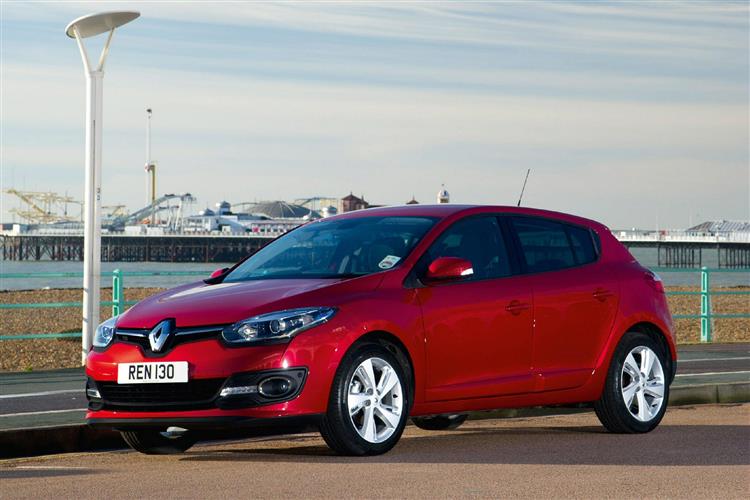