Quite why it took Renault so long to dip its toe into the 4x4 market is open to conjecture but when it did, the Koleos model it brought to market wasn't a bad first stab. It was distinctively styled, rode well, wasn't priced unreasonably and ran on tried and tested Nissan-sourced mechanicals. By most accepted measures, the formula was right. But it flopped. Disastrously. What made an underwhelming new prospect can often make a corking used buy and the Koleos is no exception. Here's what to look for when hunting for a bargain used example.

Whatever your view of compact 4x4s - be they stylish facilitators of the active lifestyles that modern urban families are supposed to pursue or triumphs of image over ability - there's no denying that they sell. In the current climate, a major manufacturer without some kind of soft-roader to offer the public is like a supermarket with no baked beans, it's missing out on a major revenue stream. All of which explains why Renault, a brand conspicuously lacking a glittering back catalogue of 4x4 vehicles, launched the Koleos - its first proper 4x4. Even the baying hordes of families clamouring for school run cars that look like they could nip up the north face of the Eiger couldn't persuade Renault to jump into the off-roader market unprepared. The French marque's controlling stake in Nissan presented the perfect opportunity to utilise the considerable 4x4 know-how of the Japanese firm and the Koleos arrived running on the same platform as Nissan's latest X-Trail. This was something of a coup for Renault with the X-Trail having consistently been one of the compact 4x4 market's leading lights. Unfortunately, the public seemed intent on keeping Nissan sales buoyant and gave the Koleos the cold shoulder. The range was rationalised in June 2009, pared back to just the Dynamique dCi 150 4x4 model and this was quietly deleted from the price lists in early 2010.

Renault's claim that the Koleos has the interior of an MPV is not entirely without substance. Families looking at a people carrier but wanting something with a little more presence could well be persuaded. There are generously proportioned storage spaces around the cab with highlights including a spacious glovebox and a removable storage bin in the centre console. The boot opens in two sections to aid access where space is tight. The lower one drops down to form a ledge capable of supporting 200kg so you can slide bulky items inside on it or sit on it and take your boots off. It's true that looks are a big part of the appeal of compact 4x4s but the Koleos is notably less aggressive with its off-roader design cues than some of its rivals. Inside, the designers have fashioned a classy and extremely high quality space that's a match for anything in the sector. The last of the cars was very well equipped with climate control, Renault's hands free key card, electrically heated and folding door mirrors, front and rear parking sensors, roof rails and automatic lights and wipers. The run out vehicles (post June 2009) also saw a BOSE sound system that includes a digital amplifier, seven loudspeakers and a woofer, a six-CD/MP3-compatible multi-changer, 3D Satellite Navigation with a seven-inch screen and DVD atlas, hands-free Bluetooth telephone link and metallic paint. It makes these final cars the best Koleos models to track down. What To Look For (used_look) 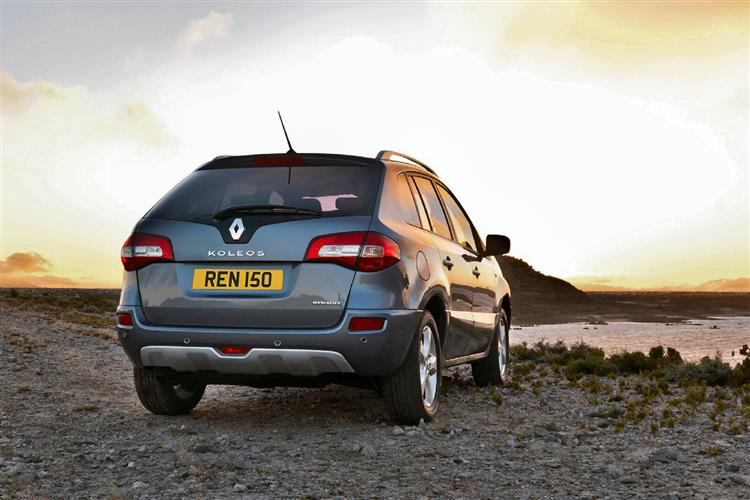