I SEE YOU, BABY! (some text hidden)

As adventurous as its predecessor was staid, the Megane II range suddenly put the mid range Renault on the shortlists of many younger buyers who would never have countenanced the ageing and rather frumpy original. It rapidly spawned a huge number of variants. Aside from the original three and five door hatches, there was a compact estate, a neat saloon and the sleek Coupe Cabriolet as well as the Scenic and Grand Scenic variants that are covered separately. With used models now starting to appear in meaningful numbers, the Megane II represents a very tempting proposition.

The Megane II came as a bit of a shock to many largely because its predecessor seemed to have been around forever, morphing gently from the Renault 19 into the Megane. We were just becoming accustomed to the rather pert posterior of the Clio when Renault unleashed the bustle-backed Megane II, a car with a profile quite unlike anything seen to date. Older customers may have baulked at the radical design but Renault was keen to mop up a whole wave of younger buyers who'd previously eschewed the Megane as something your grandfather might have a soft spot for. The three and five door hatch models were launched in the UK in summer 2002 with the Coupe Cabriolet, Sport Tourer estate and Sport Saloon being launched at the tail end of 2003. April 2003 saw the launch of the Expression variant while in October a dCi100 version of the 1.5-litre diesel engine was unveiled. Sales were promising and there are quite a few used hatchbacks to choose from, although the later variants are still far rarer. The Megane's mid-term facelift showed up in early 2006. More observant members of the public might spot elongated, sleeker headlamps and alterations to the grille which see everything come together in a 'V' shape either side of a more prominent Renault badge at the front. The rear benefited from it's own re-sculpted bumper and revised light clusters while, inside, the instruments got chrome-ringed dials with white background lighting. At the same time an automatic version of the 130bhp dCi engine was introduced and Renault unveiled a special Renaultsport F1 edition of the Renaultsport 225 hot hatch to celebrate their victory in the 2005 F1 World Championships. A little later in the year, the advanced 150bhp 2.0-litre dCi diesel engine was introduced and this was followed at the end of 2006 by yet another Renaultsport, this one cranking out 230bhp and named the F1 R26 after that season's F1 car. The next addition to the line-up was the Renaultsport dCi powered by 175bhp 2.0-litre diesel. A new Megane arrived in the later stages of 2008.

The underpinnings of the Megane II are as fresh as its styling. In partnership with Nissan, Renault developed a new 'C Platform' with seven different Megane II body styles planned with an estimated 1.8 million C Platform vehicles a year being sold between Renault and Nissan. Two distinct styles opened the batting for the Megane II range - the Hatch and Sport Hatch - which, translated out of Renaultspeak, mean five and three-door versions. The Sport Saloon four-door, the two door Coupe Cabriolet and the Sport Tourer estate back up the more mainstream hatchbacks. Heady stuff indeed, and probably a sound explanation why the current hatches look so avant-garde. As is the norm in this sector, Renault make a diverse selection of engines available in the Megane. The 1.4 and 1.6 units are the stalwarts of the petrol line-up, both agreeable 16-valve units developing 100 and 110bhp respectively with the 1.4 averaging over 40mpg. Then there's the 2.0-litre 136bhp option which, along with the 1.6, can be equipped with an automatic gearbox. The 165bhp 2.0-litre Turbo powerplant is usefully quick, making 62mph from standstill in 8.3s, but those seeking real hot hatch credentials will need to step up to the 225bhp 2.0-litre Turbo found in the Renaultsport offerings. The diesel range is almost as broad. An 85bhp 1.5dCi unit opens proceedings with its headline-grabbing fuel economy average of 62mpg. It's not all that quick though and some may prefer the 105bhp version of this engine which is a second and a half faster to 62mph but still returns 60mpg. The 130bhp 1.9-litre dCi is a strong all-rounder, packing 300Nm of torque at just 2,000rpm. It will achieve 0-62mph acceleration figures of 9s, return 50mpg at the pumps and it's the only diesel you can get with automatic transmission. The Megane's most impressive engine could well be the 2.0-litre dCi 150. With 0-60mph acceleration of 8.7s, it's only fractionally slower than the 165bhp petrol alternative but it can still deliver 52mpg economy. Those looking for a genuinely innovative convertible are also catered for. The Megane II Coupe-Cabriolet is the first of its ilk with a folding glass hard top. Three trim levels are offered - Extreme, Dynamique and Privilege - and Renault also ace their French rival Peugeot by offering no fewer than three engines and three different transmission choices. The entry-level engine is a 115bhp 1.6-litre VVT unit, there's also a 136bhp 2.0-litre VVT powerplant for those with a heavier right foot and real speedsters will like the 165bhp 2.0-litre Turbo. The Megane Coupe-Cabriolet was the first hard-top cabriolet to feature a diesel engine a 120bhp 1.9-litre dCi. This was later upgraded to 130bhp and joined by a more affordable 106bhp 1.5-litre dCi. 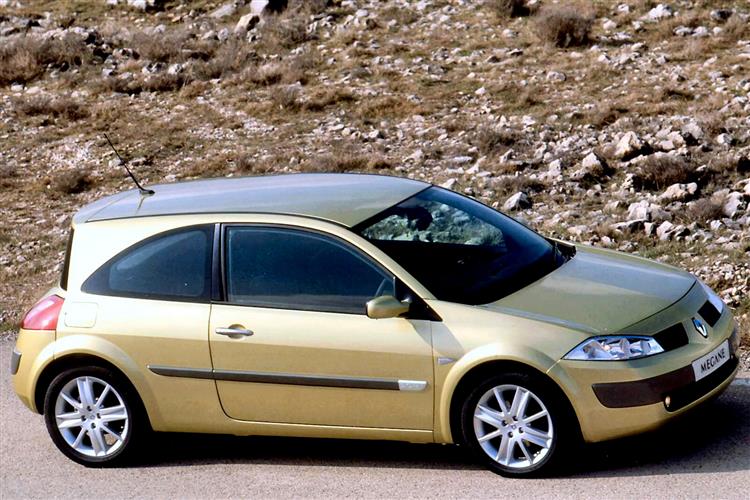