RENAULT RISES TO THE CHALLENGE (some text hidden)

If you need plenty of space and want an affordable family-sized Crossover or SUV, your range of options is widening. Here's a contender you might want to have on your list, Renault Koleos, which features in the French maker's line-up just above the successful Captur and Kadjar Crossover models. In this improved guise, it offers a higher quality package.

If the Koleos name rings a bell, then that's because Renault has used it before - with an ill-fated Qashqai competitor that sold for just two years between 2008 and 2010, quickly withdrawn from sale because buyer interest in it was so low. Things have proved to be a lot better this time round. The Koleos is based almost entirely on a Nissan X-Trail, an SUV which has proved to be a strong contender in the D-segment. It doesn't aim to compete directly on price with volume versions of the X-Trail, but that's only because Renault has kitted this car out with enough equipment to embarrass pricier competitors in this class from Kia and Hyundai.

Koleos buyers now choose between a couple of diesel engines; a 1.7-litre 150PS Blue dCi 150 unit with front wheel drive and a 2.0-litre 190PS Blue dCi 190 unit with 4WD. Both powerplants come mated to a seven-speed automatic X-Tronic gearbox. The auto is a CVT set-up that adjusts itself continuously whilst maintaining optimal engine speed and can also simulate gear shifts, producing more powerful acceleration. The four-wheel-drive Koleos model comes equipped with ALL MODE 4x4-I technology borrowed from its X-Trail design stablemate. This enables you to select your driving mode - AUTO, LOCK or 2WD - and keep complete control of the powertrain on any terrain. For tarmac territory, there's also what's called 'Active Trace Control'. By using on board sensors to monitor speed, steering angle, throttle opening and braking effort, Active Trace Control brakes wheels individually, as required, to reduce understeer and help the driver steer a safer path through bends: it is particularly effective on slippery, wet roads. 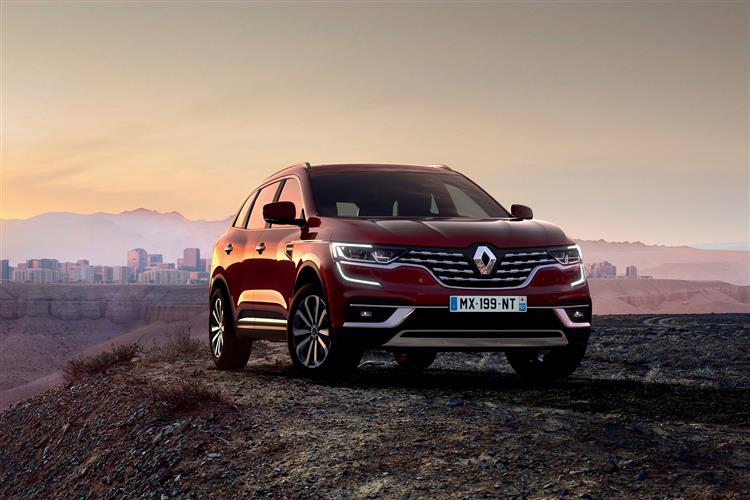